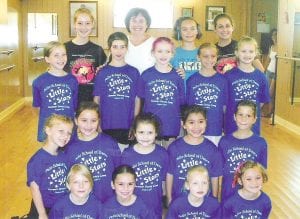 MUNDY TWP. — Pelio School of Dance, 6255 Torrey Rd., is celebrating 75 years of offering dance to the community and beyond.

Director Lisa Pelio is carrying on a rich tradition started by her mother Lena. Offering her extensive knowledge and skill, Pelio attracts dancers from all over to her studio.

“We have always had a lot of people come from Swartz Creek. Also, Metamora, Waterford, Saginaw, and Clarkston,” she said.

Swartz Creek resident Shari Burdt has been a “wonderful person involved with our school. She always helps backstage. My son calls her Grandma Shari and now other kids call her that too,” said Pelio.

Burdt whose grandchildren are third generation dancers at the studio, is a pivotal force at the school and one of the many devoted alumni who is a life-long supporter of the Flint dance studio legacy.

“I’ve got dancers I taught as little girls bringing their daughters in,” said Pelio, who adds that boys are also involved, including her own son. She is proud that the Pelio’s continue to dance within the studio her mother started just after graduating high school.

“Women who are doctors and attorneys call us and tell us how their training benefits them in their careers now,” she said.

“Our history is pretty rich,” said Pelio. Her mother Lena opened the studio in 1937 with an emphasis on performance, which led to a long history with the Whiting Auditorium where dancers perform yearly, most notably at Christmas time.

Lena left behind an amazing institution of spirit, drama, and discipline. Her accomplishments were many.

According to the school website Lena was billed as “the second Eleanor Powell and her high-energy spins and machine-gun taps brought the house down in every nightclub and theatre around the Great Lakes that featured musical revues.”

The determined dancer brought in professionals from all over the world to instruct at her school. Before her passing in 2006 she also helped form the Mott Performing Arts Association, worked on the Flint College and Cultural Development committee, founded the Flint Ballet Theatre, and taught many professional dancers who now make a living with the skills she taught them.

Lisa is carrying on the tradition her mother so eagerly built. With her own impressive resume which includes a career on screen and off dancing and teaching in major cities like Atlanta and Chicago, she returned to her hometown and formed Danse Michigan. She is proud to bring professional dance back to Flint.

She emphasizes the Cecchetti Method at the school, one which is highly respected in the dance world. In the past she has been elected Teacher of the Year by the Cecchetti Council of America. She has won numerous other esteemed awards and was even appointed to the Michigan Humanities Council.

“We are very strong on the Cecchetti syllabi. We hold advance level. Not many studios do,” she said.

For Pelio, dance not only benefits the body, but also the mind, which makes it a perfect component for the school year.

“It quickens student’s minds. It benefits both sides of the brain,” Pelio said of the memorization of steps and the choreography involved.

“We are gearing up for a fun year,” said Pelio. Fall enrollment is still open. Preschool through adult ages are all welcome to join in on the vibrant history and shared love of movement. For more information contact the school at 810-655-4960.