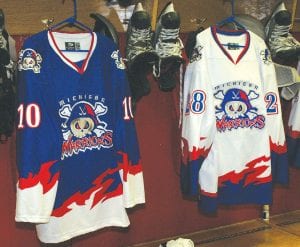 Home and away jerseys hang on display at Perani Arena for the new Michigan Warriors.

FLINT
— Originally built in 1969 and named the IMA Sports Center, Perani Arena has been home to numerous professional sports franchises over the past 41 years, including hockey teams like the Flint Generals (1969-2009), the Flint Spirits (1985-90) and the Flint Bulldogs (1991-93). Now that the North American Hockey League’s Michigan Warriors have taken up residence, new owner/operators Firland Management have decided to invest close to a $1 million to return the venue to its previous state of glory, a move the company hopes will bring in fresh tenants akin to previous headliners such as the Flint Fuze basketball team (2000-01), the Flint Flames (2000) and Flint Phantoms (2008) indoor football squads.

“We’re right in the middle of roof replacement currently. It’s 170,000 square feet, a big job, but it’ll be done in the next 45 days. An expensive project, it cost close to a halfmillion dollars. We’ve also rebuilt five of our concession stands, which includes television screens with video streaming so you can watch the game as your getting your food,” said Firland CEO Jim Cain last Thursday during a media tour of the event center’s recent facelift. “The screens will be an opportunity to advertise and they’ll serve as menu boards, as well. They’ll serve a multitude of functions, but once again it was a necessary and expensive project the we probably spent several hundred thousand dollars on.” 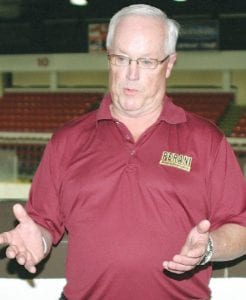 In what Firland is calling an, “investment in the fan experience”, the organization even went so far as to upgrade the food service equipment in the concession stands, refresh the countertops, and added new display board menus and pointof sale stations. Beyond the roof and the food service areas, the facility has also stepped up its game by installing new concourse lighting, enhancing the ice surface lighting and numerous aesthetic adjustments designed to, “restore Perani Arena and Event Center to a point of pride for the Flint community.”

“As you can see, we’ve also spend a lot of time, effort and money into painting this entire facility. Now the place is a lot brighter, it looks better, and the service experience is going to be much better than it has been,” Cain said. “In conjunction with the Warriors, we’ve also done a complete refurbishing of their locker room, as that’s an important piece of the junior hockey experience.”

Among those changes are the addition of four stalls, a changing room, and a players lounge, allowing athletes a certain amount of mobility and freedom that simply wasn’t available to any of the building’s past tenants

“With the Michigan Warriors now here as the prime tenant of the place, we expect these efforts to bring more people in to this building,” said Cain. “We look forward to seeing some fans here enjoying what we have to offer.”

One of the major obstacles to keeping the location profitable is energy management, because while it may be a behind-the-scenes issue, cost becomes a major concern when considering the size of the building and the outdated nature of the technology currently in place. Firland replaced the ceiling tiles in Perani, as well, no small task given they number 2,500 in just the main arena.

“It was time to bring this building back to the standards of acceptability, not only for hockey, but all the other types of shows and acts we might be able to attract, which is all part of the whole formula,” Cain said. “Flint deserves a first-class entertainment venue. We’re investing in Perani Arena and the Flint community to make this a destination for all kinds of events, from hockey games to high school graduations and from trade shows to consumer expos. We promised improvements and we’re already delivering them in the aesthetics and functionality on the arena. We’re confident the people of Flint and the surrounding area will like what they see.”