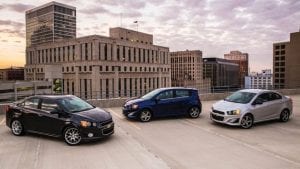 Chevrolet unveiled at the recent L.A. Auto Show two new sedan options to the Sonic lineup in 2014 – the performance-inspired RS and the stylish Dusk.

“Keeping the Sonic lineup fresh and offering consumers more choice is a priority for Chevrolet,” said Cristi Landy, Marketing director for Chevrolet small cars. “The Sonic RS and Dusk sedans offer all of the great attributes that have made the Sonic a popular choice in the subcompact segment and they add performance and design cues.”

EPA-estimated fuel economy ratings for the Sonic RS are the same as the Sonic RS hatchback – 27 mpg city and 34 mpg highway with the manual transmission.

Sonic Dusk is powered by the Ecotec 1.4L turbocharged engine, rated at 138 horsepower and matched with six-speed manual and automatic transmissions. EPA-estimated fuel economy ratings are 29 mpg city and 40 mpg highway, with the manual transmission.

Both models go on sale in spring 2014 and will be manufactured at Orion Assembly in Michigan. Sonic is the only subcompact assembled in America.

The Chevrolet Sonic and Spark are the first vehicles to offer Siri Eyes Free integration, Bluhm said. Through the cars’ available Chevrolet MyLink infotainment system, customers with a compatible iPhone running iOS6 or iOS7 can direct Siri to perform a number of tasks while they safely keep their eyes on the road and their hands on the wheel.