‘Performance is an attitude’

Dodge took the wraps off its new 475-horsepower 2018 Dodge Durango SRT, introducing America’s fastest, most powerful and most capable three-row SUV with 475 horsepower at the Chicago Auto Show in February.

“Performance is more than stats, at Dodge performance is an attitude that permeates through everything we do,” said Tim Kuniskis, Head of Passenger Car Brands – Dodge, SRT, Chrysler and FIAT, FCA – North America. “And new for 2018, Durango buyers can get SRT attitude with every Durango powertrain – from the 295 horsepower 3.6-liter Pentastar V-6 to the 360 horsepower 5.7- liter HEMI V-8 to the new 475 horsepower 6.4-liter SRT – strengthening the brand’s promise to deliver performance vehicles with world-class power, technology and standout styling our customers have come to expect.” 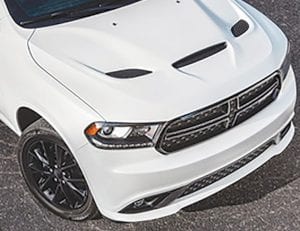 In addition to the new front fascia, Durango R/T is one of only two models to be available in a B5 Blue exterior color (late availability); Durango SRT being the other. Front Park Assist, which uses sensors in the front bumper, is now included with ParkSense Park Assist System and is now standard on Durango R/T models. New for 2018, Durango GT models now feature a standard power liftgate and Capri and suede bucket leather seats. Capri leather seats and the Technology Group are also available as standalone options, as well. For 2018, all Durango models feature a backup camera, a new sport steering wheel and driveroriented electronic T-shifter which provides the driver with intuitive gear selection and offers an Auto Stick selector gate for added control. Customers can also opt for the available hand wrapped instrument panel with accent stitching. 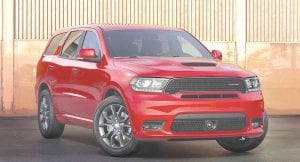 Dodge continues to deliver customization and features that its loyal Durango customers love. Durango R/T’s new look is standard with a BeatsAudio nine-speaker audio system that includes a subwoofer and a 506-watt amplifier. This BeatsAudio premium audio system offers studio quality sound in the customer’s vehicle, available on the Durango GT and Citadel, and standard on R/T. The Dodge Durango boasts class-leading towing and driving range, confident driving dynamics, advanced technology, aggressive styling, and with the addition of the new exterior performance fascia on R/T, now offers even more ways customers can stand out in a sea of sameness.

Dealers are currently able to place orders and vehicles will start arriving in dealerships in the third quarter of 2017. Pricing for the 2018 Dodge Durango will be announced closer to vehicles arriving at dealers.