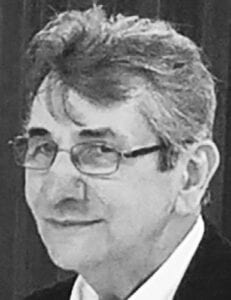 He was born July 4th, 1938, in Hibbing, MN, the son of Tomo and Bosiljka (Samardzich) Deretich. He graduated from Hibbing High School in 1956 and attended the University of Minnesota-Duluth. He later earned his Master’s Degree on Education from the University of Michigan. Peter started his first teaching job in 1962 at Lake Fenton High School, where he met his future wife Linda Newcomb. Peter and Linda were united in marriage in 1967. They both took teaching positions shortly afterward at Grand Blanc High School, where they spent the remainder of their careers. Peter loved sports, old western movies, the outdoors and his childhood home of Hibbing, where he will be buried.

Peter is survived by his wife, Linda Deretich of Holly; four siblings; and many nieces and nephews.

He was preceded in death by his parents and six siblings.

Memorial donations can be made in Peter’s name to the Elk’s Club of Flint.