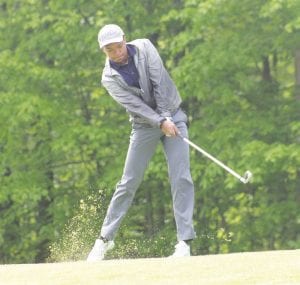 Carman-Ainsworth senior Haywood Petty swings from the fairway during last Thursday’s Div. 1 district at Davison Country Club. Petty shot 79 to qualify as an individual for this week’s regional.

Grand Blanc’s team and individuals Garrett Jewell and Hunter Hull of Swartz Creek and Haywood Petty of Carman-Ainsworth will play in the regional at Currie Golf Course in Midland on Friday. The top six teams and top six individuals not on those teams moved on from the district.

Jewell also shot 79 to tie for sixth, while Hunter Hull shot 82 to grab one of the last two qualifying spots. Creek totaled 343 to finish seventh, three strokes off the final team qualifying berth. Josh Bouchard shot 90, Austin Parker 92 and Colton Smith 99 to round out the Dragons’ scoring.

The top three teams and top three individuals not on those teams will advance to the state finals June 5-6 at Katke Golf Course on the campus of Ferris State University in Big Rapids.