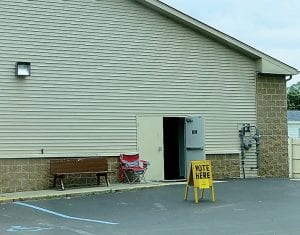 With only about 8.83 percent of county voters turning out for Tuesday’s election, parking lots were empty and lines non-existent similar to this scene at the VFW polling site on Corunna Road where campaign workers reported only 23 people had passed through one precinct by mid-afternoon.

In the November general election, he will face Republican Don Pfeiffer, 40, of Flint who outpolled one opponent — Patrick Duvendeck, of Flushing.

The seat has been vacant since May when Jim Ananich was elected state senator to fill the vacancy created in November when John Gleason was elected Genesee County Clerk.

Voter turnout was light with only about 8.8 percent of 104,339 registered voters countywide showing up at the polls.

Phelps was chief of staff for state Representative Pam Faris until April of this year when he resigned to run for the 49th district seat. His political resume also includes volunteering for Congressman Dale Kildee at age 13; serving as president of the University of Michigan- Flint College Democrats and as a member of Political Science National Honor Society Pi Sigma Alpha. He earned a bachelor’s degree in political science in 2006 while working on Governor Jennifer Granholm’s reelection campaign and acting as a spokesman for the Genesee Health Plan ballot initiative. Afterwards, he took a position in the Michigan State House Democratic Communications office where he worked for 8 Democratic members from the Mid-Michigan area. Next he was chosen by Lt. Governor John Cherry to become a regional director of external affairs for the Granholm-Cherry administration. Later, he worked as a special advisor for House Democratic Leader Richard Hammel before going to work for Faris.

The 49th district is traditionally votes Democratic which makes Phelps all but a shoo-in to win the seat outright in November.

His Republican challenger Pfeiffer most recently ran unsuccessfully for Mayor of Flint. He was born and raised in Flint and owns a consulting company in the technology industry, according to his web site.

He described himself as a moderate Republican and his top campaign issues included Public Safety, Fair Taxes & Economic Growth, Investing in Education, Veterans and Accountability. — By Rhonda S. Sanders