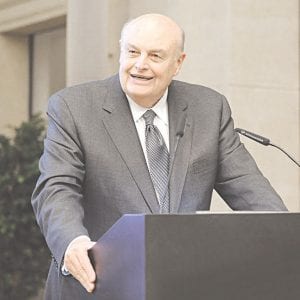 GENESEE COUNTY — One of the longestserving leaders of a major philanthropy in the United States, William S. White passed away peacefully on Oct. 9 at age 82.

Just two days earlier, White delivered an impassioned speech as his storied career was celebrated by the Council of Michigan Foundations at that organization’s annual conference.

Born in Cincinnati, Ohio, in 1937, he was the only child of Nathaniel Ridgway White, a business writer and editor for the Christian Science Monitor, and Mary Lowndes White, a civil engineer. He grew up in Westchester County, New York, and Boston. After graduating with a Bachelor of Arts from Dartmouth University in 1959, he completed a Master of Business Administration at the university’s Tuck School of Business the following year. From 1960 to 1962, he served with the United States Army.

In 1961, White married Claire Mott, a granddaughter of industrialist Charles Stewart Mott, who created the Foundation that bears his name. Eight years later, White’s father-in-law, C.S. Harding Mott, hired him as a consultant. In that role, White subsequently helped to reorganize and modernize the Foundation’s administrative, financial and grantmaking procedures.

His success in those efforts led to White being named vice president and secretary of the Foundation in 1971 and elected to its board of trustees. Over the coming years, he would be elected to the positions of president, chief administrative officer, CEO and the role he served until his last day: chairman of Mott’s board of trustees.

Under White’s leadership, the Mott Foundation grew from a primarily local funder with assets of roughly $377 million to an internationally recognized philanthropy with assets of more than $3 billion.

As a grantmaker, White built a reputation for seeking out solid, well-managed organizations and funding them to create infrastructure and sustainability in key sectors. He recognized that the stubbornness and complexity of the issues we seek to address means that they will not be resolved overnight. He often said that having patience and taking a “long view” are essential for meaningful, sustainable change to take root. And he embraced Charles Stewart Mott’s belief that good things happen when people work in partnership with their communities.

The possibility of failure never prevented White from taking calculated risks, and many paid off — none more than his offer of $5 million to seed and support the federal government’s 21st Century Community Learning Centers initiative. Mott’s support helped build the fledgling, bipartisan effort to keep children safe after school into a highly regarded national program that now provides high-quality enrichment and academic programming for 1.7 million children each year.

The recipient of many honors, perhaps none more gratifying to him than the Council on Foundation’s Distinguished Grantmaker Award in 2002, White also received The European Foundation Centre’s first-ever Philanthropy Compass Prize in 2009; the Beacon Award for Services to Community Philanthropy from the Community Foundation Network in the U.K. in 2010; and the Republic of Poland’s Officer’s Cross of Merit award for his contributions to the development of civil society in Central and Eastern Europe.

He served on many local, national and international boards throughout his long career, but most enjoyed the opportunity to observe world conditions first-hand, as he did through his appointment to the Carter Center’s observer delegation to the Palestinian elections, on the U.S. Presidential Delegation led by former Ambassador Richard Holbrooke to observe the elections in Bosnia, and on a Presidential Economic and Business Development Mission to Croatia and Bosnia.

Outside his philanthropic responsibilities, White also served for many years as the chairman of the board of the U.S. Sugar Corporation. He was a member of the governing council of The European Foundation Centre and was the recipient of five honorary degrees. A generous supporter of the arts, he and his wife Claire were recognized by ArtServe Michigan with the Guvvy Award — the Michigan Governor’s Award — for lifetime achievement in advancing and supporting arts and culture in the Flint area. A deeply spiritual man, he was a member of and served three years as Reader at the First Church of Christ, Scientist, Flint.