Pickin’ and a grinnin’ 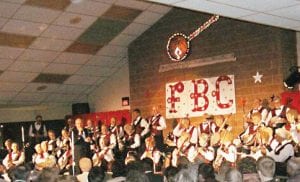 The Flint Banjo Club performing at a previous Banjorama

DAVISON
— What started as a handful of self-described “banjo nuts” getting together to play after a rough winter in 1967 has become a club of more than 50 members.

The Flint Banjo Club, considered one of the best clubs in the United States, has also established a long history of holding its annual Banjorama. The event, in its 35th year, is the Flint Banjo Club’s primary fundraiser.

According to the club website at www.flintbanjoclub.com,
the club was founded in April 1967 by six banjo enthusiasts from the Flint area.

“…no doubt as a result of cabin fever resulting from the preceding relentless winter,” the website says further. Among the current members is C. O. Johnson, one of the original six founders, who is still strumming away with the ensemble.

The FBC has collected a number of awards. Members have diverse professional backgrounds and most are retired. The club has performed throughout the state and across the country, in concert at prestigious halls including the Whiting, as well as hospitals, schools, and senior homes. The club has raised more than $50,000 for community projects and in particular, scholarships administered by Mott Community College.

Since 1974, the annual “Banjorama” has been the club’s primary fundraiser and has featured a variety of banjo and nonbanjo entertainment. Joining the club for Banjorama this year will be Picks and Sticks and Canadian banjoist Mel Collie.

Picks and Sticks of Detroit is described as having a “rollercoaster” style of emotional performing The FBC website says the group creates “an amazing animated and entertaining atmosphere and an on-stage presence that no one will forget.” Their music is described as acoustical folk, swing, traditional, light pop, western, jazz, and ethnic tunes.

Collie has performed in dinner, theater and other venues for more than 30 years. His vaudeville type variety act is based on “old tyme” music hall shows he attended in London, England, in the 1950s.

Food and refreshments are available. The show starts at 7 p.m. The club suggests those attending buy tickets early, because this is generally a “sold-out” evening. The cost of tickets are $12.50 a piece.