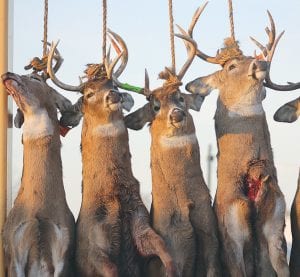 The 4:30 p.m. display at Madden’s Lounge showed the low turnout. Most of the bucks came in during the evening portion.

Highlights at the Lapeer pole included 72-year-old and three-time cancer survivor Barbara Mauk bagging her first-ever deer, a buck. She has for years taken her kids and grandkids hunting, said Ray Brown of Wheelin’ Team 457, who was scoring the bucks. Another pair of youngsters, brothers Christopher and Hunter Best had brought down a pair of spike horns. The eight- and 11-year old brothers were reportedly more excited than on Christmas morning. Brown noted that the first deer was brought in around 7:30 a.m.

At North Branch, spectators were marveling at a still-steaming massive 10-point with huge rut neck. It dwarfed the buck hanging next to it. Beth Hayes, coordinator of the North Branch pole and owner of the North Branch Food Center said between 9 and 11 a.m., the parking lot was full and the bucks were being brought in one after another. Sam Coulter was the first woman to bring in a deer at 9:30 a.m. and at 3 p.m., a 13-year-old was still the youngest to hang one. Haynes noted that the heat in the tent was provided by Harmon Oil, donuts were provided by the North Branch bakery and Independent Bank provided the coffee and hot chocolate. Dick Coulter donates the tractor each year to help hang the deer. Lots of other businesses at all three poles had donated raffle prizes, music, warming tents, vendor booths, and of course, the chili cookoffs took place in the early evening.

At Lapeer it was all about records as a massive, impressive 25-point buck was brought in by Billie Pfeiffer of Durand, which he bagged in Clare County. The atypical buck had a very unusual rack. See Wednesday’s County Press for photos of the Grand Prize winner and his beauty of a buck. By the end of the night, a record 51 bucks were entered into the contest, with many more still waiting in the parking lot to enter, but were cut off. A record crowd was in attendance to see who the winners were and the very tired staff at Ray C’s Extreme were cleaning up and going over the entries and stories of the day. Randy Green of Attica was the first to the pole around 7:30 a.m., Christopher Best, 8, of Metamora was the youngest, Logan Douglas of Metamora was the first woman to enter a buck and Barb Mauk was the oldest at age 72. People’s Choice went to Charlie Moore of Clarkston and the runner up big buck prize went to Jose M Rios of Imlay City, who bagged a stag, still in velvet. The last hunter to enter the contest was No. 51, Jesse Konatzar of Attica. Many other unusual bucks were hung said the staff at Ray C’s Extreme Store. All proceeds from the pole were donated to Wheelin’ Team 457 of North Branch.

At North Branch, 29 bucks were on display by the end of the night. The $100 Lucky Buck Winner was Sam Coulter, while the first to enter a buck was Mike Crakouwski. First female to enter her buck was Coulter, the youngest was Ben Brace and the oldest, Lyn Gravlin. The largest buck was entered by Travis Swoish and he won the full shoulder mount.

The Genesee County pole at Madden’s Lounge had a shockingly low number of deer by 4:30 p.m. with just five on display, but by end of the contest at 8:30 p.m. 25 were entered. At lunchtime, a lone buck had been brought in.

“It was a low number, compared to Lapeer,” said Marty Madden. “They’ve got state land to hunt on over there, and it’s a more farm-related community. But our numbers got up there pretty decent. A lot of people came out, and a lot kids, which was good to see.”

Prizes were given for the top three entrants based on weight and points. Mike Rowden took first place and won a crossbow, Steven McCarthy picked up a shoulder mount for second place, and Ken Humphries received a 20-gauge shotgun for third.