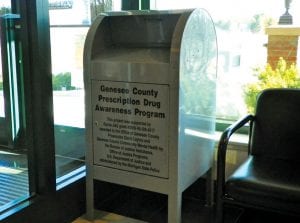 PILL BOX DROP — The Flint Township Police Department is now playing a more prominent role in keeping prescription drugs out of the wrong hands. As part of a permanent countywide effort, the police station at 5200 Norko Drive is one of six locations with a permanent drug collection box for residents to drop off expired, unwanted and unused medications (but no liquids, patches or needles). The secure metal mailbox like container is bolted to the floor in the lobby of the police station which is open 24-7, said Police Chief George Sippert. Residents are encouraged to use it. “Don’t let (drugs) fall into somebody’s hands that would abuse them,” Sippert said. “Bring them to the police department. We work closely with drug enforcement agencies and will destroy them (safely).”