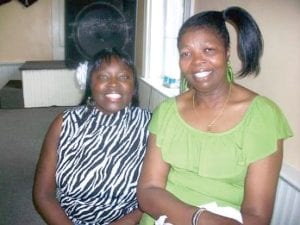 Jowanne Carrigan (right) is one of the hundreds of women that have benefited from Hurley’s Breast Health Navigator Program. After being diagnosed with breast cancer, Carrigan utilized the resources provided to her through the program, which helped guide her through the difficult journey. In order to fund the Breast Health Navigator Program, Hurley is partnering with Financial Plus Credit Union in the first ever Pink Night Palooza event, which will take place on Oct. 6 at the Holiday Inn & Gateway Center.

Editor’s Note: View Newspaper Group is proud to be a Pretty in Pink Media Sponsor of the Pink Night Palooza event. The following is an article that provides information about Pink Night Palooza and how the event can make a big difference in the lives of those with breast cancer.

FLINT — When her doctor actually said the words, Jowanne Carrigan says it didn’t feel real. She refused to believe it.

“How could this happen to me? I run all the time, I exercise, I go to checkups regularly, I eat what I’m supposed to, and… I don’t deserve this,” she asked herself, reliving that moment.

Jowanne, who lives in Clio, first found out about her breast cancer after a routine annual checkup. It was still early, still classified as stage I, but any time a doctor says the word “cancer” to you, the mind has a tendency to blur.

She said after running through a range of emotions, she decided to see some of the different kinds of counselors the oncologist had recommended, one of which was Marsha Schmit, a Breast Health Navigator at Hurley.

“Marsha is a fantastic person that cares about people in general,” said Jowanne, “She really focuses her attention on her patients and supports them emotionally, and, in some cases, monetarily.”

Schmit, who, has helped hundreds of patients with breast cancer, has been a Breast Health Navigator since 2008 and helps to steer women through the difficult journey they face after being diagnosed. When appointed to the Breast Health Navigator position in 2008, Schmit brought with her more than 20 years of experience and immediately began trying to develop a clear and informative plan for her patients to help with the complicated and trying process of dealing with a breast cancer diagnosis.

“I started studying and learning to help me develop a new program,” said Schmit. “I talked to a lot of people that had had cancer previously and asked them, ‘What kinds of things were missing? What would have been helpful?’ And the one thing that was loud and clear was that people need education. When people get that diagnosis, sitting in their doctor’s office, pretty much the last thing they clearly hear is, ‘You have breast cancer.’ And people’s minds go blank, and they don’t actually hear the rest.”

But there’s a whole lot more to it, and that’s where Schmit and the Hurley Medical Center’s Comprehensive Breast Cancer Program come in. They are there after you calm down and begin to process the information, once you start figuring out the questions you want to ask. And they’ll answer some you didn’t even know you had, helping you every step of the way.

After women are diagnosed with breast cancer, they face an entire list of problems. Whether it’s psychologically processing their illness, trying to manage their work and home life with their doctor appointments, paying for bills after taking time off work or having to leave their job, or worrying about their families, the list goes on.

Women like Jowanne have benefited in magnificent ways from the Breast Cancer Program and Breast Health Navigator, and each of them seem to say the same thing: they don’t know what they would have done without Hurley.

Jowanne is now cancer free and says she couldn’t be happier with the treatment she’s received, both from Schmit and from Hurley.

“Marsha helped with everything I needed, and without ever batting an eye. Ever since then, I feel like I’ve kind of been a positive thorn in her side, if that’s possible, going up to see her, going to events, Pink Palooza everything. She can’t get rid of me,” Jowanne laughed.

Because of the costs associated with programs like these, Hurley has enlisted the help of the community, hosting a number of events and fundraisers to help benefit those in need. One of the fundraisers that directly supplements the Breast Navigator Program is Pink Night Palooza.

The original Pink Night fundraiser was started in 2007 by employees of Financial Plus who had a passion for raising awareness and monetary funds for those affected by breast cancer. In 2015, Financial Plus raised a net of $69,000 for American Cancer Society’s (ACS) Making Strides Against Breast Cancer (gross of $77,000).

The Pink Night Palooza event will be held at the Holiday Inn & Gateway Center in Flint, and is scheduled for Thursday, Oct. 6 from 5-11 p.m. Tickets for Pink Night Palooza are still available and can be purchased online at www.hurleymc.com/pink.