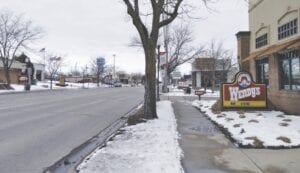 GRAND BLANC — Years ago, the Grand Blanc Planning Commission sought to curb the proliferation of drive-through restaurants in the central business district.

Now, the regulations they put in place to accomplish that endeavor are being reconsidered.

“We have had a lot of discussion and a whole lot of inquiries,” said planner Brian Borden. “The last year has really intensified the conversation … related to the city’s current regulations.”

Lately, “it’s as though the only new businesses that call us want to be drive-through restaurants,” Borden said. “Given the current environment, where a lot of restaurants are really only functioning via drive-throughs, and what that may or may not mean for the future may be up for debate. But if there was ever a time to have a conversation about potentially changing your ordinance, this was the appropriate time.”

Currently, at least three developers have their sights set on three different properties in downtown Grand Blanc, and “they’re all very interested to hear how this conversation goes,” he said.

Without going into too much detail, he said one of the properties is an existing development, one a new development on vacant land, and the third a redevelopment that currently has “a building or buildings that would come down.”

“There are at least three developers right now that we are having, if not weekly, then monthly conversations to figure out how they should proceed,” Borden said.

With Starbucks, Wendy’s, Burger King and Tim Horton’s all offering drive-up service within a short distance of each other, the central business district has no shortage of drive-through restaurants already.

Borden said he is not suggesting the city allow more drive-throughs, he’s only letting city officials know that what he’s hearing from the development community is there is a big push for more.

Were the commission to loosen the requirements, they would need assurances that concerns about traffic flow, pedestrian safety and the impact on nearby residential areas would be properly considered, they said.

Borden said that can be accomplished with a traffic study.

He plans to take some time over the next month to draft an amendment for the Planning Commission to consider at their next regular meeting.