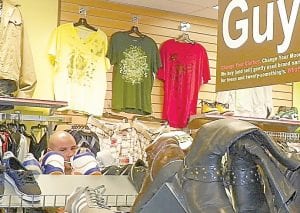 The guys section at the back of the store was also packed with shoppers.

FLINT TWP. — Every Plato’s Closet grand opening usually has a long line waiting outside the door for the store to open and Thursday was no different for the new one at 3192 S. Linden Road in Oak Brook Square Plaza.

There was a waiting line of about 100 people all the way back to the Hobby Lobby store next door, said Nick Leja, co-owner of the trendy resale shop that caters to a youth market.

That long line of shoppers all packed inside the 3,000 square-foot store when the doors opened, making a beeline for bargains among racks and stacks of goods on display.

Many of them had learned about the store opening during a sevenweek “buy” period when the store was open only to buy merchandise from the public while it built up inventory.

Lori Woida of Linden said her daughter Dayna, 16, came to the grand opening to buy a designer purse she had spotted while visiting the store to sell some items.

While her daughter scored her purse and other deals, Woida said she was shopping for herself and her husband. 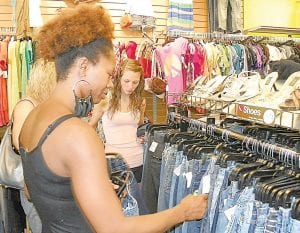 Simone Mayo, 31, of Flint Township dropped her children off at school before coming in to shop for herself because she’d heard a lot about Plato’s Closet stores in other cities.

“I like it. It’s a good thing for the economy,’’ Woida said.

From now on, the store will be buying and selling “gently used’’ trendy items with labels popular with young people in their teens and twenties.

Kristina Wolfgang, 16, of Montrose, said she was in line by 9 a.m. for the 10 a.m. store opening. She’d also been to the store previously as a seller. “I like it a lot,’’ Wolfgang said, while piling jeans on her arm to try on.

Simone Mayo, 31, of Flint Township also arrived early after dropping her young children off at school.

Mayo said her sister had raved about shopping at Plato’s Closet stores in the Canton and Detroit areas so she made a note to come back after noticing the Flint Township location while walking by one day.

“I’ll be back on a less crowded day so I can take my time and really look,’’ Mayo said.

Leja said he’s hired 15 employees and is looking for two or three more. The store has five unisex dressing room including a wider one for handicap accessibility.

“So far, so good,’’ Leja said of the opening minutes at the store when the aisles were so packed with shoppers it was hard to move.

Store finds include designer denim, purses, shoes and more for guys and girls, said Leja who owns the store with his mother Sue Leja- Mac.

They also own the Disc Replay resale store in the same plaza, which buys and sells used movies, video games and music. That store launched in 2009 when Nick Leja returned home from college and decided to pursue his entrepreneurial dreams.

With help from his parents that first venture was successful and led to Leja looking to expand and diversify. His research showed a void in resale options for teens and young adults which persuaded him that opening a Plato’s Closet locally would be a great fit. He’d visited a sister store in Saginaw during his research.