Playoff position on the line 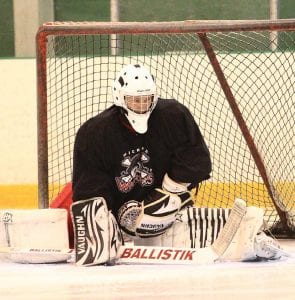 FLINT — The Michigan Warriors Class A Junior hockey team is currently fourth in the eight-team North Division of the North American Hockey League at 30-16-6 with just six games left in the regular season.

Most recently the Warriors hosted Chicago at the Perani Arena and Event Center winning, 6-1, last Saturday on goals by Justin Hoomaian, Bobby Bodette, Robert Mantha, Ryan Green (2) and Martin Gruse. Defensively Robert Tadazak made 20 saves on 21 attempts to get the victory. Michigan also beat the Hitmen, 5-0, last Friday after taking leads of 2-0 and 4-0 at the end of the first and second periods. Scoring for the Warriors was Tyler Perpich, Andrew Kolb (2) Ryan Trenz and Mantha while Tadazak swatted aside all 24 shots he faced to earn the decision.

Michigan is at the West Meadows Arena Friday and Saturday for the rematch with Chicago and on March 25-26 Janesville comes to town.

The Michigan Mountain Cats Class B Junior hockey team, which plays its home games at Ice Mountain as a part of the Great Lakes Junior Hockey League, ended its 2010-11 regular season with a five-game winning streak. This includes victories of 3-1 and 5-2 over Wooster on Feb. 27 and 26, on Feb. 25 Michigan topped Tri City, 7-2, and on Feb. 23 the Mountain Cats edged out Ft. Wayne, 7-6. In turn, Michigan then took on Motor City in the first round of this years postseason, losing, 4-3, on March 4 and 10-1 on March 5.