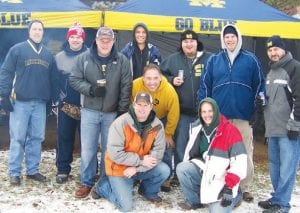 The JF Photography men’s hockey league squad prior to the Big Chill game.

ANN ARBOR
— A local flavor was part of the record-setting Big Chill hockey game featuring U-M vs MSU on Saturday, Dec. 11. The record crowd of 113,411 included the men’s hockey league JF Photograhy team from the Polar Palace of Lapeer and their friends and family.

“Who would’ve thought 10 years ago, when I called the Polar Palace to get information to ask for help in organizing a men’s league hockey team, that our team would still be competing in the league and have a group of over 50 attending an early-morning tailgate party before going in to the Big House as spectators,” said JF Photography team rep Tom Fererri.

Fererri says he got involved with the core group of JF Photography players nearly 10 years ago when it was trying to form a men’s recreational hockey league at the new Polar Palace Arena.

Sixty-five people including the JF Photograhy team, family and friends hosted a tailgate at the Big House prior to the game that includes wives, girlfriends, parents and grandparents. 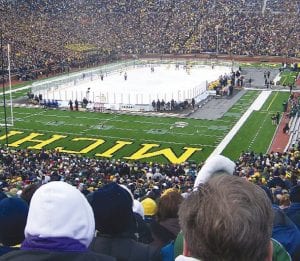 The Big House was transformed into an outdoor hockey arena for the record-breaking attendance hockey game.

“It was just a good camaraderie atmosphere and with the game and fireworks just the whole experience was remarkable for hockey players and fans,” Fererri noted.

The stadium crowd that watched U-M shut out the Spartans, 5-0, was announced as 113,000 and change, but the nationwide television audience was told 113,411 was the official mark as recognized by the Guinness Book of World Records. Fererri added that afterwards Guinness said it was closer to 85,000 because ticket scanners were not always functioning in the cold. Official count was by actual people in attendance, not tickets sold.

U-M hockey coach Red Berensen had quipped in the post-game press conference that perhaps someone had added seats because the Big House holds 109,000.

Guinness adjudicator Mike Janela was on site and told the Detroit Free Press that each person was counted, not ticket stubs sold. While the exact number was in question, Janela noted that the final tally was certainly enough to smash the previous world attendance of 77,803 set May 8, 2010 in Gelsenkirchen, Germany. In 2001, Spartan Stadium in East Lansing broke the then-record with 74,544 at the Cold War hockey game between MSU and U-M.