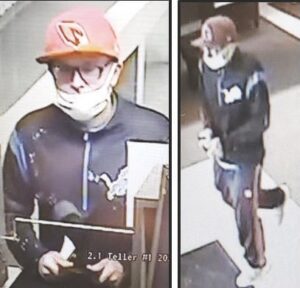 The suspect in the Sept. 20 robbery of the Chase Bank at 1232 Belsay Rd., in Burton. Photo courtesy of Crime Stoppers of Flint & Genesee County

BURTON — Police have arrested a man who allegedly robbed the Chase Bank, 1232 Belsay Rd., on Sept. 20.

The man entered the bank at approximately 1:10 p.m., Monday, after passing a note to the teller demanding money.

Police said the teller gave him money and he left the bank on foot and got into the passenger side door of an awaiting white sedan before driving away.

A cash reward of $1,000 was being offered through Crime Stoppers of Flint and Genesee

According to reports a man and woman were arrested in connection with the robbery on Tuesday. — G.G.