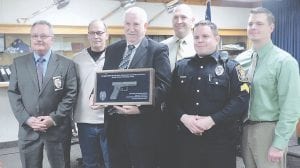 In keeping with tradition, upon his retirement, Detective Richard Pinter received his framed service revolver, badge and a farewell cake in a ceremony Monday at the Flint Township Board meeting. His fellow officers and family members joined the sendoff.

FLINT TWP. — Before there was Google, or Wikipedia or other readily accessible online information sources, the Flint Township Police Department had its very own fountain of trivia knowledge in the person of Detective Richard Pinter, said Police Chief George Sippert, in his lighthearted remarks at Pinter’s retirement ceremony Monday night.

In addition to being an outstanding officer, “Ricki-pedia,’” who is an avid Detroit sports fan could quote sports statistics going back decades. Song lyrics? Pinter knows those too.

“Now you have Google to look everything up,” Chief Sippert joked. “Prior to that, we had Rick.”

On a serious note, Chief Sippert presented Pinter with his service revolver, badge and a cake marking 25 years of service.

Pinter joined the department in 1992 and a few years later became the field training officer where he was a coach and encourager for many new officers, Chief Sippert said.

Many may remember Pinter from his stint as the officer assigned to Genesee Valley Center shopping mall from 2008 to 2011, where he was highly visible making the rounds.

Many businesses hated to see him go when he was reassigned to the detective bureau where he continued his role as a mentor to young detectives, Chief Sippert said.

During his career, Pinter received numerous service awards including two Unit Citations for Professional Excellence and a Life Saving Citation, according to a proclamation in his honor from the township board of trustees.

The proclamation also noted Pinter’s most recent assignment to the Investigations Unit where he is credited with solving “a wide variety of crimes.”

“Detective Pinter is known for his reliability, wit, wisdom and keen approach to serving the public,” the proclamation stated.