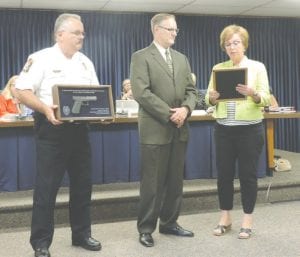 Detective Russell Fries, on his retirement from the police force, received the traditional send-off including presentation of his badge and gun and a proclamation from the township board.

FLINT TWP. — After 25 years of service on the Flint Township Police Department, Detective Russell Fries is hanging up his badge.

At the Monday night township board meeting, Police Chief George Sippert, other officers and the township board sent Fries off with the traditional presentation of his retirement ID and badge and engraved duty gun followed by a brief cake reception.

Chief Sippert praised Fries for his “commitment and dedication” as a hardworking member of the police force for 25 years.

Hired in August 1992, Fries began aa a patrol officer then moved through several roles including community police officer assigned to Genesee Valley Center mall; detective investigator, arson investigator, Motor Carrier Officer, sergeant and most recently as a member of the Genesee Auto-Theft Investigation Network (GAIN) for the past two years or so.

Chief Sippert also praised Fries for his technology savvy. He was highly instrumental in getting search warrants for cellphone and computers and also headed up the fingerprinting system live scan which Fries often booted back up online after it crashed. 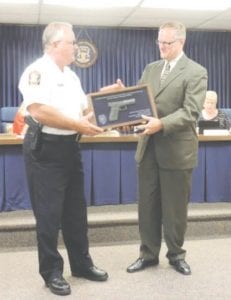 “We are going to miss Russ,” Chief Sippert said, adding that he hates to see another experienced officer go.

The police department has an ongoing struggle to get the department up to its fully budgeted staff of 45.

Township Supervisor Karyn Miller read a proclamation from the township board honoring Fries. it cited him for playing “an integral part of several high profile criminal investigations resulting in the apprehension, conviction, and incarceration of numerous violent individuals,” while assigned to the Detective Bureau.

The proclamation also said that “Detective Fries has received numerous awards and citations recognizing his determination and commitment to professional excellence.”