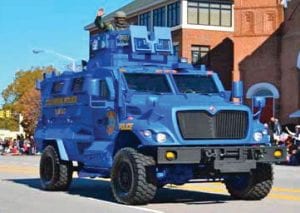 FLINT TWP. — The Police Department has a new crime-fighting vehicle – a military-grade Humvee courtesy of the U.S. Department of Defense Revitalization and Marketing Office (DRMO) 1033 Program.

The 1033 Program permits the Secretary of Defense to give away Department of Defense supplies and commodities to state and local law enforcement for use in their duties, according to Police Chief George Sippert, in a memo to the board of trustees, explaining the acquisition.

Flint Township will use it as a high-risk rescue vehicle, he said.

“When it comes to active shooters, you can take a load of officers into an active shooter situation – whether it be up at the high school or at the Genesee Valley Mall – and they would essentially be protected from anything from shotgun to rifle or pistol rounds that were fired at them. We don’t have a piece of equipment that protects our officers that way now.” 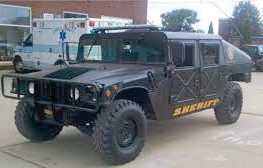 Flint Township Police Department’s newly acquired military surplus vehicle was not available to be photographed but these are examples of military vehicles obtained via the same program by police departments in other municipalities.

Sippert said the vehicle would cost more than $75,000 if purchased new. It did not cost the township force anything but requires some retrofitting to make it useful as a police vehicle.

At the Nov. 18 township board meeting, Sippert received board approval to spend $10,000 in state Drug Forfeiture money to modify the vehicle.

The four-wheel-drive, diesel powered vehicle has a Marine Armor Kit designed to provide extra protection for military applications but is not useful in local law enforcement, Sippert said.

Also it has an open top bay in the rear and lacks a means of communication between the rear passenger area and the driver bay. It also will be repainted black from its current army green color.

Eddie Holloman, the company president, estimated the value of the modifications at more than $22,000 but has agreed to do it for $10,000 as a community service, Sippert said.

Sippert said there is more than enough drug forfeiture money available to cover the cost of the vehicle modifications. He also said that spending the money on protective equipment complies with prescribed uses for drug forfeiture funds.

Trustee George Menoutes asked about the condition of the vehicle given his understanding that military surplus is usually pretty worn out.

Sippert said the vehicle was never deployed and is pretty clean inside and out.

Menoutes also asked if any other local police department in Genesee County has one.

Sippert said that Grand Blanc Township and the county Sheriff’s Department have applied to the program for a similar vehicle but as far as he knows Flint Township is the only department to obtain one.

Menoutes expressed concerns abut liability and insurance costs and how much the vehicle will actually be used.

Sippert said it will not be used daily but a price tag cannot be put on its usefulness should the need arise.

Trustee Frank Kasle also questioned the need for a military-grade vehicle despite the bargain price.

“You could get a bargain on a tank but how often would you use it?” he asked.

The 1033 program has generated some controversy nationally about the “militarization’’ of local police departments, the usefulness and value of the equipment with reportedly some $4.2 billion worth of equipment being transferred through the program since 1990.