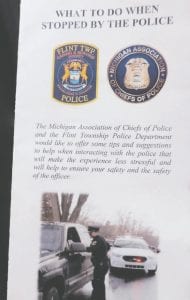 FLINT TWP. – “What to do when stopped by police” is a new brochure created by the Flint Township Police Department in cooperation with the Michigan Association of Chiefs of Police. Copies are available at the township hall and police station and also being handed out by officers, said Police Chief George Sippert, who displayed the tri-fold, full-color brochure at the April 17 township board meeting

“It is just advice to guide people on what to do when they come in contact with police,”. Chief Sippert said. “We often make the assumption that people know what to do, what the protocol is and what is going to happen. So, this is kind of a guide for them to use.”

The brochure covers several topics including:

-why do police stop citizens or vehicles”

– “If approached or stopped by an officer”

– “your rights if arrested”

– “if you believe you are being treated unprofessionally”

For example, the Searches by Police section, advises that “You may be searched without your consent when arrested, if a search warrant has been issued, if an officer has a reasonable belief that you have committed or will commit a crime. As for being frisked, an officer may pat you down for a weapon if the officer has reason to believe that you may be armed and dangerous.”

“Notify the officer that you have a Concealed Pistol License (CPL)) permit or a weapon in the vehicle” are among the list of what to do during a traffic stop, a circumstance which recently has ended in numerous situations nationwide in which citizens have been shot and killed.

Also, “if your documents (driver’s license, registration, insurance) are out of reach tell the officer where they are before you reach for them.”

“Video recording,’ advises that “you do have the right to record an interaction with the police. An officer will only seize the recording if the officer believes the recorded video or audio contains evidence that must be protected.”

“Police at your home,’’ includes advice to ask to see a badge or identification card, if the officer is not in uniform. Usually, a police officer will knock on your door for one of several reasons: “to interview you or a member of your household as a witness or a suspect to an incident that is being investigated; to serve an arrest warrant, to serve a search warrant, to make a notification.”

Officers may enter a residence with consent or if they have an arrest or search warrant. You may ask to see a copy of the warrant (but) if it is an arrest warrant, they are not required to have it with them to make an arrest.”

“Use of force,” tips include that “police officers in Michigan are trained to use on the force reasonably necessary to make the arrest.’ “If arrested, do not resist – this may justify a need for greater force by the officer.”

“If you believe you are being treated unprofessionally” the advice is to “comply now and complain later. Contact the officer’s immediate supervisor. If not satisfied, complete a formal complaint at the police station.”

“How to get involved,’ by getting to know local offices includes joining the Flint Township Crime Watch which meets at 6 p.m. on the fourth Tuesday of each month or by joining the police force, which is currently hiring. Application information is included on the brochure and posted on township websites.

Chief Sippert said that the department plans to print and circulate many of the brochures to the public.

“I think it will be helpful,” he said.