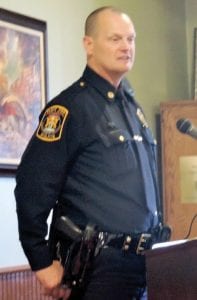 Lt. Robert Battinkoff of the Flint Township Police Department speaks to the West Flint Business Association about the proposed Public Safety Millage on the Nov. 4 ballot.

FLINT TWP. — Flint Township is the third most dangerous city in Michigan, according to information shared by Lt. Robert Battinkoff, in a presentation last week to the West Flint Business Association.

Battinkoff is making power point presentation to various groups throughout the township to promote the Public Safety Millage on the Nov. 4 ballot asking voters to approve 3.85 mills for police and fire safety.

Flint Township’s “dangerous” ranking, second only to No. 1 Flint and No. 2 Detroit, is from the 10 Most Dangerous Cities in Michigan Report, compiled by HomeSecurityShield.org, based on annual FBI uniform crime report statistics derived from combined violent and property crimes, Battinkoff said

He used Mt. Morris Township and Burton as comparable communities that have less crime than Flint Township but much higher public safety millages.

Comparably, Flint Twp. currently levies 0.75 mills – a quarter of a mill for fire and a half mill for police. That millage expires at the end of next year so if voters approve the proposed 3.85 mills, it will balance out to about a 3.35 increase.

Battinkoff explained that the millage is needed to maintain the level of public safety and enhance it. Noting a 22 percent decline in Flint Township’s revenue since 2007, Batinkoff said funds to support public safety have come from a dwindling reserve fund, which is almost tapped out. Due to reductions in the police budget, the force is down from 45 officers to 35 officers currently and the fire department is down from 14 fulltime firefighters to 10, he said.

Township officials have said that further cuts will be necessary, if the millage does not pass.

Battinkoff acknowledged opposition to the millage increase by those who have a political axe to grind against township elected officials. But he stressed the importance of public safety over personal vendettas and said he tells every group he meets with that voters have the ultimate control.

“If we don’t trust them (elected officials), it is our job as citizens to go in and make them do what they said they would do,” he said.

“This isn’t a political issue, this is a public safety issue.”

Public safety millage funds will be used strictly to support police and fire services, he said. The millage is expected to generate about $3 million. Half would be used to maintain current staffing and service levels and the other half to add to staff and services, he said.

He noted that the cost per taxpayer is calculated to be about $11.23 per month for the typical home with a true cash value of about $70,000.

Battinkoff noted that federal and state resources have been allocated to Flint to help battle its crime problem. Similarly, neighboring communities like Mt. Morris and Burton have passed higher millage to support public safety.

“Criminals don’t evaporate because there are more police officers. They move,” he said “What we are seeing is that over time a lot of criminal activity is moving into Flint Twp. I firmly believe that in order to make this township as good as it can be, we have to address that issue and we have to address it now.”