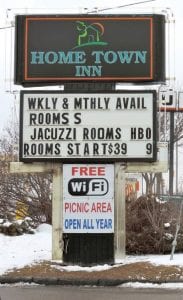 A township police officer was shot Friday night during an incident at the Hometown Inn on Miller Road, a known trouble spot.

FLINT TWP. — The shooting of a township police officer last Friday night is one of three major incidents during the past week. Police also reported a teen sexual assault and a pedestrian fatality.

The shooting occurred at about 10:35 p.m. on Friday, January 23, in the parking lot of the Hometown Inn, 3277 Miller Road, according to a press release.

The officer, a two-year veteran on the police force was making a traffic stop, when he approached the driver, a 54-year-old man. The officer was attempting to take the suspect into custody for multiple misdemeanor warrants when a scuffle ensued, police reported.

The suspect allegedly resisted arrest before pulling a handgun and firing multiple shots at the officer, who was struck.

The suspect also shot at officers from Swartz Creek who responded to the “officer down” call for assistance. They returned fire and the suspect was shot multiple times before being taken into custody.

Both the officer and the suspect were transported to the hospital where they have undergone surgeries and are reported in stable condition.

The name of the suspect has not been released. Township police also declined to identify the wounded officer.

The Michigan State Police is handling the investigation and will pass its findings to the Genesee County Prosecutor’s office for review.

The 140-unit Hometown Inn is a known trouble spot in the township. In 2010, the Flint Narcotics Group busted a possible meth lab set up in one of the rooms there. Two people were arrested.

In 2010, near the entrance to the complex, officers discovered the body of Frank Kellybrew, 60, who proved to be one of the victims of a serial killer. Kellybrew was a tenant at the Hometown Inn.

In other police news, on January 22 at 3:37 a.m., police responded to a report of a pedestrian struck by a motor vehicle on Corunna Road near Meida Street.

On arrival, they learned that a vehicle traveling east on Corunna Road had struck Wayne Miller, 61, a Flint Township resident. Miller was transported to the hospital where he was pronounced dead.

The driver of the vehicle, a 26-yearold Flint woman, was not injured. The cause of accident remains under investigation.

Anyone able to provide information is asked to contact Detective Nick Sabo at 810-600-3250.