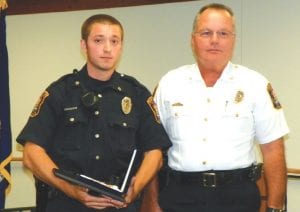 FLINT TWP. — Flint Township Police Officer Nicholas Sabo is credited with saving the life of a suicidal Flint man threatening to leap off an overpass bridge on to the I-75 freeway during an incident in March.

For his actions, Sabo has been awarded the Medal of Meritorious Service, presented by Police Chief George Sippert at the township board meeting Monday night.

In giving an account of Sabo’s action on March 19 of this year, Sippert said Sabo was on routine patrol when he saw a young man standing on the Beecher Road bridge looking down at traffic on northbound I-75.

Driving past in a marked patrol car, Sabo noted that the young man was not walking across the bridge, Sippert said. Sabo parked his cruiser and approached on foot to ask the man on the bridge what he was doing.

The young man responded that he was mustering the courage to jump off the bridge.

Officer Sabo notified dispatch and asked for back-up. Then he began a conversation with the “jumper” who at first refused to identify himself and made statements that did not make sense, Sippert recounted.

Officer Sabo tried to find out why the guy wanted to take his life. But as Sabo walked closer, the “jumper” warned him to stay back then used his arms to lift himself slightly over the retaining wall leaning toward traffic on the freeway below, Sippert recounted.

About then, Sgt. James Daly arrived on the scene to assist. When the man on the bridge saw the second officer, he lifted his leg and began to climb over the retaining wall.

While he was distracted by the arrival of Sgt. Daly, Officer Sabo seized the opportunity to rush the man and tackle him around the waist, pulling him back onto the road way.

The man, later identified as a 22- year old Flint resident, was taken to Hurley Medical Center where he was petitioned for psychiatric evaluation, Sippert reported.

In his commendation of Officer Sabo, Sippert said he demonstrated “tremendous courage” in a difficult situation,

“Officer Sabo prevented a young man from taking his own life. If not for his intervention, the man would likely have injured himself or died,” Sippert said.

He also noted that motorists on the freeway might also have been injured or killed if the young man had jumped from the bridge.