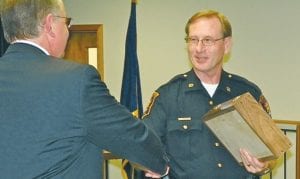 FLINT TWP. — The police department said farewell to Sgt. Norman Loranger with a cake and special recognition at the township board meeting Monday night.

Loranger is retiring this week after 25 years on the force.

He is the department’s eighth command supervisor to retire in the past four years, said Chief George Sippert who presented Loranger with the traditional retirement plaque and mounted service pistol.

Turnover has been steady in the department recently with the retirements of several seasoned officers.

Loranger’s tenure was a bit different in that he left the department in 1977 after four years of service then returned in 1988 for the rest of his career.

Sippert said he met Loranger in 1985 when both worked plant security at General Motors. Loranger rejoined the Flint Township police force about two years after Sippert did,

“I had the privilege of being Norm’s training officer and he taught me a lot,’’ Sippert joked, evoking laughter. 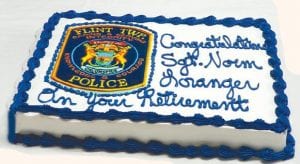 Cake was served during a retirement celebration for Sgt. Norm Loranger after 25 years of service.

He recalled other humorous memories such as Loranger growing a pony tail while serving on the FANG drug enforcement unit.

Loranger also served as a field training officer and the detective bureau in recent years was the department’s Information Technology (IT) computer expert.

“When we moved to our new building he was very helpful,” Sippert said, noting that the township did not have IT service at that time and Loranger stepped in and did a great job at the police department.

He also did forensics investigation and worked as a road patrol supervisor and shift commander during the last part of his career, Sippert said.

Township Supervisor Karyn Miller read a proclamation from the board recognizing Loranger for his “significant contributions” to the Flint Township community.

It cited Loranger for his “quiet dependability, sound judgment and composed and fair approach to the public and the officers assigned to his command.”