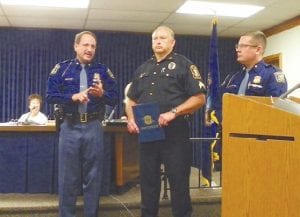 FLINT TWP. — Two township police officers have been singled out for special recogntion.

Lt. Robert Batinkoff recently received the Service Above Self Award from the Genesee Valley Rotary Club.

Announcing the award at the township board meeting Monday night, Chief George Sippert said Batinkoff was honored for his investigative work in solving the carjacking and homicide of Leslie Mills, a Grand Blanc woman who was shot and killed at a gas station on Corunna Road earlier this year.

Also township police Sgt. Randy Kimes was presented the Michigan State Police Award for Professional Excellence in recogntiion of his role in the August 2010 capture of serial killer Elias Abuelazam.

On hand at the township board meeting to present the award were Michigan State Police Lt. Col. Dan Atkinson and Capt. Richard Arnold.

Atkinson said state police held off on award presentations until after the suspect was convicted. The awards now being given out recognize the work of a task force including Kimes who was instrumental in the investigation, Atkinson said.

A special task force was formed in the summer of 2010 in response to several assaults and murders in flint and the surrounding areas.

The task force also included officers from the state police, the Genesee County Sheriff, Grand Blanc Township, the cities of Burton and Flint and Genesee Township. Federal and out– of-state agents got involved later as the investigation continued.

“Detective Kimes was the one who put together that we had a serial killer on the loose,’’ Atkinson said.

The task force started out with very little evidence, no suspect and few leads, Atkinson said.

“During the next five days, (Kimes) worked tirelessly with the task force to gather forensic evidence and identify a suspect,’’ Atkinson said. “Your tenacity in bringing the suspect to justice resulted in his arrest in Georgia moments before his international flight would have left the country.”

Atkinson stressed that team work played a big role in solving the crimes.

“We had basically nothing to go on but within five days a suspect was iidentified and a arrest made’’ he said, praising an outstanding job done by all involved.

Abuelazam was charged with three homicides and six counts of assault with intent to commit murder. He has been convicted and sentenced to life in prison without parole.