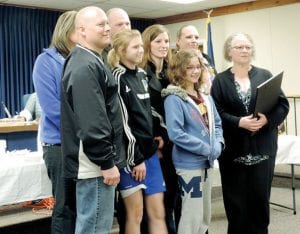 Retiring communications operator Janelle DeVille was joined by family and supporters at her retirement send-off during a recent township board meeting.

FLINT TWP. — In labor union history, some refer to it as “The Big One” – the 1998 strike by United Auto Workers at local General Motors plants that lasted 54 days.

For Janelle Deville, it meant she needed to find a job to help maintain the family income while her GM-employed husband was on strike.

She found work as a police communications operator at the Flint Township Police Department and kept on working for 17 years.

“It is really busy there,” Deville said, at her retirement celebration last week during the Flint Township board meeting. “It’s got to a point old age has set in. I decided it’s time to step down and let someone younger fill in.”

The word “busy” hardly covers the reality of DeVille’s duties, according to Police Chief George Sippert.

Instead of asking ‘what do communications operators do?” it would be more apt to ask, “what don’t they do?” Sippert said.

The police department operates around the clock and if staffed day and night by communications operators who man the phones, serve as a public receptionist in the lobby and act as tour guides, experts on township services and sometimes even legal advisors, he said.

“Janelle has helped do this work for many years,” Sippert said. “We could always count on Janelle, who usually had a smile on her face.”

Most recently assigned to the day shift, DeVille played an integral leadership role in day-to-day operations of the police department, according to a proclamation in her honor from the township board, read and presented by Township Supervisor Karyn Miller.

Over the years, DeVille served as a trainer for new employees and a union steward.

She was known for her “dependability, composure, and fair approach to the public and other employees assigned to her shift.”

The township board suspended its meeting for 30 minutes to hold a cake reception in Deville’s honor. She was accompanied by family, friends and other well-wishers.