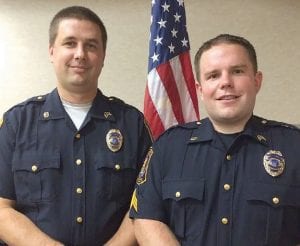 FLINT TWP. — Police officers Brett Cassidy and Michael Nemecheck now answer to the title sergeant. Both were approved for promotions by the township board last week after their names were submitted by the Civil Service Commission as the top two highest test scorers eligible for promotion.

Officer Cassidy joined the police department in 2009. After serving as a patrol officer for almost three years, he was assigned to the investigation’s unit where he has excelled as a detective, said Police Chief George Sippert, in his recommendation to the board. Prior to beginning his law enforcement career with the township, Officer Cassidy earned a Bachelor of Science Degree in Criminal Justice from Saginaw Valley State University and an Associate’s Degree in Criminal Justice from Mott Community College.

Officer Nemecheck began his career with Flint Township in October of 2008. After working five years as a road patrol officer, he was assigned as a detective to the Flint Area Narcotics Group (FANG). Officer Nemecheck holds an Associate’ s Degree in Criminal Justice from Lake Superior State University.

Both officers were sworn in a ceremony at the police department on Wednesday, September 9. Upon their promotions, both sergeants returned to road patrol duties serving as shift supervisors.