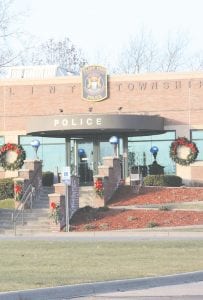 FLINT TWP. — Hoping to facilitate a smooth transition when he retires some time next year, Police Chief George Sippert has asked for promotions of a lieutenant and sergeant.

The township board approved his request for the Flint Township Civil Service Commission to provide a certified list of the highest scoring candidate eligible for promotion. The sergeant candidate will replace either Lt. James Baldwin or Lt. Kevin Salter – the two officers eligible to become chief when Sippert retires.

That succession will create openings for a patrol officer to be promoted to sergeant.

Chief Sippert said he met recently with members of the township’s personnel committee to stress the importance of planning for future leadership in the police department.

“I anticipate retiring in 2018 from my position as your Chief of Police,” he said. “In the interest of maintaining quality public safety services, employee morale and continuity, consideration must be given to taking steps to ensure a smooth transition to a replacement department administrator.”

He noted that the township has committed in recent years to career development opportunities and training for members of the department in preparation for promoting someone to become the new police chief.

“This preparation will pay dividends as we move forward, “he said. “Your commitment assures that leadership changes can be accomplished smoothly without disruptions that can negatively impact our community.”

A request has been sent to the Civil Service Commission to begin testing for the Chief of Police position. Lieutenants Salter and Baldwin are the two officers currently eligible to participate in testing, he said.

The new chief will be taking the reins “under incredible pressure, “Chief Sippert said.

For that reason, he suggested that promoting a new lieutenant and sergeant as soon as possible will take some of the pressure off the duties of the new chief during a critical adjustment period.

Chief Sippert declined to say when he plans to retire but said he will give plenty of advance notice. He has served as chief for more than a decade.

Funding for all promotions is included in the 2018 police budget, he said.