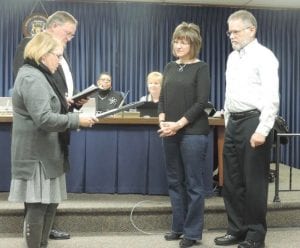 County Commissioners Kim Courts and Ted Henry present proclamation to Janice and Stephen Baillie officially bestowing their family name on a pond near their home.

FLINT TWP. — It’s official. A request has been approved to name a pond on Calkins Road in honor of the family who built and has maintained it for more than 50 years.

Genesee County Commissioners Kim Courts (4th district) and Ted Henry (8th district) attended the township board meeting Monday night to officially present a proclamation to Janice and Stephen Baillie hereby naming the body of water as Baillie’s pond. Janice Baillie brought the request to the township board last March seeking to officially name the spring-fed pond which is adjacent to their home.

Stephen Baillie’s family has owned the western edge of the pond since 1955, according to information submitted with the request. His parents Thomas and Mary Baillie purchased the property in 1955, Thomas Baillie hired someone to dredge out the western end of a marshy area that is now a pond that supports wildlife.

The pond was widened to its current size a few years later when the eastern end was dredged by the Our Lady of Lebanon Catholic Maronite Church, which purchased and still owns the property.

The church gave its consent to name the pond in honor of the Baillie’s Bu the naming process also required the support of the township board, county commission and the U.S. Department of the Interior U.S. Geological Survey. Up until now the pond appeared on maps as an unnamed geographical location though locals have called it Baillie’s pond for years.

Stephen Baillie has been caretaker of the pond since he was 14, after his father died. He purchased the property from his mother in the 1980s, built a seawall and has been responsible for chemical treatments of the pond for algae and weeds so that ducks, swans and fish can live there.

The church helps buy water treatment chemicals and also installed a fountain for beautification. The pond, just west of Graham Road, is readily visible to drivers-by on Calkins Road.

“Steve has lived all but six months of his entire life of 60 years at this property and has provided a beautiful, peaceful setting for folks to enjoy as they drive by,” Janice Baillie wrote in her application letter to the township board. “Folks who grew up around here (myself included) have always called it Baillie’s Pond and remember many years of fishing, ice skating, playing hockey, ice racing motorcycles and catching tadpoles from this pond.”