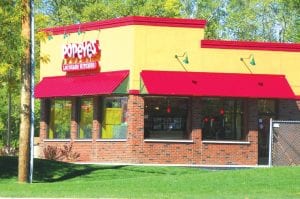 After serving up Kentucky Fried Chicken for decades, this Miller Road fast-food restaurant has a new flavor. Popeye’s Lousiana Kitchen on Miller Road opened Sept. 10 after extensive remodeling of the building.

FLINT TWP. — A newly opened Popeyes Louisiana Kitchen fast-food restaurant at 3066 Miller Rd. is the second one in Genesee County.

Billed as part of the second largest quick-service chicken chain, it moved into a building occupied for more than 40 years by a Kentucky Fried Chicken.

About 70 people were hired to work at the newly-renovated building which was completely gutted and made over into the Popeyes design, according to a corporate spokesperson.

It joins a Popeyes restaurant at 4815 Clio Road in Flint which is also oper- ated by Brodersen Enterprises of Michigan.

Popeyes is a division of Atlantabased AFC Enterprises.

The company celebrated its 40th anniversary this year. There are more than 2,000 Popeyes operating worldwide.