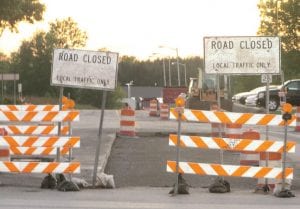 When the dust clears from road construction underway on Norko Drive, recreational paths at the increasingly popular Flint Township Park will be connected to the Genesee Valley Trail extending nearly three miles east almost to the Flint City limits on Corunna Road. The repaving project scheduled to begin Aug. 18 got a late start when road crews were tied up at on an Elms Road repaving project, according to Township Supervisor Karyn Miller. But work started last week and the road is now closed to through traffic. It is an access route to Genesee Valley Center shopping mall and also leads to the township police department and park pavilion, which still can be freely accessed from Dye Road. Work includes removing a traffic divider island on Norko at Linden Road, resurfacing the asphalt, restriping the pavement to three lanes, and creating room for four-foot-wide paved shoulders to connect the trails. Approved in April of 2012, the project start was delayed two years while easements were sought from nearby businesses. The original project estimate was $88,000 in a 50-50 cost-share between the township and the Genesee County Road Commission. The project is scheduled for completion October 10. See story in Living section about the park’s growing popularity as an event and recreational site.