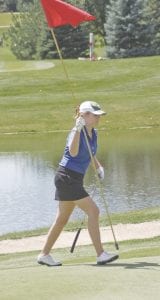 HARTLAND – Sometimes you have to make journeys on your own.

Carman-Ainsworth’s Sloan Barclay was on course at the Div. 1 girls’ golf regional at Hartland yesterday, the lone representative of her team. The Cavs have only put up one or two others along with Barclay this season because caoch Bob Blaylock says they just weren’t ready for varsity competition. Barclay, a senior, will be making her final regional appearance before she graduates in June. At the Saginaw Valley League meet last week, Barclay was 43rd overall with a 119. She’ll have to shoot the game of her life if she hopes to become one of the top three not on a qualifying team.

“Sloan is the only girl going (to regionals),” said Blaylock. “She’s a three-year varsity player and this may be her last high school match so it will be emotional for her. I hope she plays well and enjoys the day.”

The rest of the field included Brighton, ranked No. 5 in Div. 1, Davison, Flushing, Grand Blanc, Grand Ledge, Hartland, Holt, Howell, Milford and Saginaw Heritage. Only the top three teams and top three players not on a qualifying team make the state meet cut.

At the Valley Championships last week, Lapeer was second to Midland Dow with a new school record 322, beating Flint Powers by 39 strokes and Davison by 41. Heritage was outscored by 98 strokes.

Flushing was second at its Metro League championships with a 351 just one stroke behind Fenton last week. Hartland and Brighton won the Kensington Lakes Activities Association crossover meets and Hartland was second at the Jim Sander Invitational this season. Brighton took the KLAA Lakes West and overall Lakes Division preseason titles with Grand Blanc in second and Hartland in third. Grand Ledge sits atop the Capital Area Activities Conference and won the Portland Invite to open its season. It’s a rugged regional, no doubt and includes several of the area’s best players.

Flushing’s top two golfers are expected to be right in the thick of things. Kerri Parks and Kayla Gerhardt lead the squad.

“The team, as a whole, played really well at our Flint Metro League Tournament. If the girls can stay mentally focused on Thursday at Regionals, then I think they will score well,” said Flushing coach Marie Miarka.

Parks was low medalist with a 70 at the Metro meet.

“Kerrigan Parks has had a great season, despite her injury at the beginning of the season,” noted Miarka. “Her 9-hole match average is a 39.3 and her 18-hole tournament average is a 71.3. She knows the Flint Elks Golf Course and is prepared for Regionals. She’s definitely going to score well.”

“Kayla Gerhardt is another one to watch for,” said Miarka. “She has done really well all season with a 9-hole match average of 42.6 and 18-hole tournament average of 86.4. I expect to see some low scores from these two players.”

Grand Blanc’s Cammi Lucia was part of the Bobcats’ squad that surprised everyone two years ago making the state meet ahead of Davison, which qualified as the third team. Lucia plays all summer in the Flint Jr. Golf Association league and is very familiar with many of the