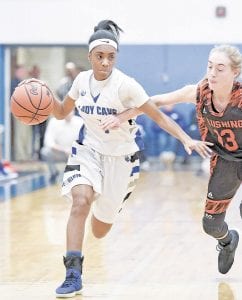 Carman-Ainsworth put Flushing into an early and deep hole after outscoring the Raiders 20-8 in the first quarter. The Lady Cavs’ passing game was deliberate and accurate. Flushing tried to erase the deficit with a 14-11 second quarter, but still trailed 31-22 by halftime.

The Cavaliers carried the momentum in the third quarter outscoring Flushing 11-5 and kept the Raiders playing catchup with a 16-12 fourth-quarter effort.

Player stats for Carman-Ainsworth were not available.

Carman-Ainsworth was at Saginaw Heritage yesterday after we went to press.