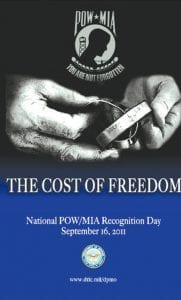 This is the poster from the 2011 POW/MIA Recognition Day.

FLINT TWP. — POW/MIAs – the nation’s Prisoners of War and other military Missing in Action – will be remembered Sept. 21 in a special ceremony at the VFW Post, 4138 Corunna Rd.

The public ceremony beginning at 8 p.m. is being held as part of National POW/MIA Recognition Day, said Pat Akers, Americanism chairperson for the VFW Ladies Auxiliary, which is hosting the event.

It will honor all 73,762 MIA’s from World War II; 8,000 MIAs from the Korean conflict; 127 MIA’s from the Cold War; 1,683 MIAs for Vietnam and two MIAs for the war in Iraq, Akers said. She could not provide statistics about local or Michigan POW/MIAs but said one of the MIA’s from Iraq is from Michigan.

The Ladies Auxiliary has sponsored similar events in the past but has not held the ceremony for about five years, Akers said.

The program lasts about a half and hour and will include an honor guard posting the colors; candle lighting and a prayer.

The ceremony centers on a round table, symbolizing everlasting concern, that is set with other specific symbols. Among them a white tablecloth symbolic of the purity of motives when answering the call to duty; a single red rose as a reminder of the lives of each missing American and their loved ones and friends who keep the faith while seeking resolution; a red ribbon tied around the vase to symbolize continued determination to account for the POW/MIAs; a slice of lemon to acknowledge the bitter fate of those captured or missing in a foreign land; a lighted candle reflecting hope for their return and a Bible representing the strength gained through faith in our country, founded as one nation under God.

Also an inverted glass is placed on the table to symbolize that the POW/MIAs cannot share in the evening’s toast. And the table is surrounded by six empty chairs – one for each branch of service – Army, Navy, Marine Corps, Air Force, Coast Guard – and civilians.

The honor guard will place a hat from each branch of service on the chairs.

“It’s kind of neat to see, if you’ve never seen it,” Akers said of the symbolic table ceremony.

The public is invited to attend.

POW/MIA Recognition Day was introduced in 1979 and is generally held on the third Friday in September. It’s purpose is to renew America’s commitment to honor those who have served their country and to seek answers for those unaccounted-for from our nation’s past wars and conflicts.