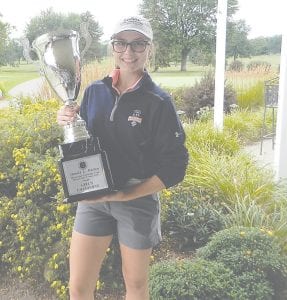 The Mallon Cup is usually the second Cup awarded during the season, but that week at Warwick Hills was rained out.

“It was not enough to cool down the putter of Jolie Brochu,” said Walter. “The Powers freshman scored a career low round of 78 to tie Fenton’s Keegan Miller. Brochu was crowned champion of the event determined by scorecard handicap tiebreaker.”

Next week the Nicklaus Group will be playing the final regular-season event at Davison Country Club. The outcome of the event will determine the Braun Cup Champion, said Walter.

Tournament play begins for the 5- and 9-hole divisions Monday with the tournament qualifier. Qualifiers from each flight will return on Tuesday for the semifinal and final round of match play to determine champions.