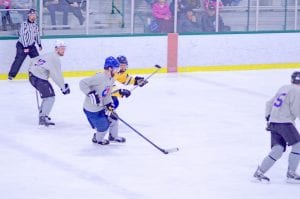 Carman-Ainsworth’s Nic Schoenfield leads a three-man rush up the ice as he tries to break away from a Kearsley player in the 30-andover game of the alumni tournament at the Polar Palace on Saturday.

The 18-and-over Dragons lost only one game in round-robin play, and that was to Powers, 6-4, but Creek came back to blank Powers in the championship game 2-0. The Powers 30-and-over squad won all five of its games. Powers beat Swartz Creek 8-1 in the title tilt to win its fourth straight championship. Both championships took place at the Polar Palace in Lapeer on Sunday.

The tournament, which has been going on since 2011 and has been hosted by both the Polar Palace and Crystal Fieldhouse in Burton, benefited the Old Newsboys of Flint this year, as well as the Michigan Youth Hockey Scholarship Fund. There was also a dedication to Rory Macdonald, a former Lapeer East hockey player and 2007 East graduate who tragically lost his life in an automobile accident in January. Macdonald had played in the previous five alumni tournaments.

The entire Lapeer East alumni team wore special jerseys to commemorate Macdonald’s life. On one shoulder were his initials ‘RM’, while on the other shoulder was his No. 12. It all culminated with a ceremonial puck drop prior to the Lapeer East-Lapeer West 18-and-over game at the Polar Palace on Saturday night where Rory’s father, Brian, who coached hockey at East and West, dropped the puck. West pulled out a 1-0 win.

Emotions were obviously running high for the 18-and-over East team throughout the tournament. In its opening game against Davison on Friday in Burton, though, things began to get a bit rough. During a 9-4 loss to Davison, the end of the game became very physical as several words were exchanged between the two squads. Referees had to step in the middle more than once.

All-in-all, the tournament, as usual, was highly successful and drew hundreds of fans out to both arenas.

“It’s funny. When you put events on it just overwhelms you when it goes off so successfully,” said Rico Phillips, tournament director. “It’s more than just a hockey tournament, it’s a charitable event for us. We collected $1,200 for the Old News Boys for the Christmas fund, over 100 winter coats were donated and we raised $5,000 for our Youth Hockey Scholarship program.”

Phillips, a 1987 Flint Southwestern grad and Flint Firefighter, said the scholarship program is a big part of the fund-raising tournament because it helps fund three area hockey associations— Lapeer County, Eastern Michigan and Greater Flint. That in turn helps a program near and dear to Phillips’ heart, the Flint Inner City Youth Hockey Program.

“The scholarship fund helps new hockey players who may need help getting started with equipment,” Phillips explained. “The Flint Inner City Youth Hockey Program is big for me because hockey in Flint for the youth has all but died. I know for a fact that there is just one kid registered from Flint. We transform those kids from the Flint Community Schools from knowing nothing about the sport and nine weeks later they know how to skate, how to play the game and it gives them a sport to play.”

A heartfelt piece of this year’s tournament was the puck drop before the East-West game.

“I heard the story about Rory when I was at the rink and we talked about what to do to honor him,” Phillips said. “With Mr. Macdonald being such an influence at Lapeer it was a no-brainer. I called up Brian and he was very appreciative and thankful. It’s such a fresh event in their lives and I was blown away by Mr. Macdonald’s openness about it. He told me, ‘we just have to keep living. What happened to Rory was something bigger beyond all of us.’ I know it made a big impact to Brian and his family and there were a lot of guys tearing up at that game. It was tough to announce, too.”

Philips added that the thanks he gets every year from the past parents, players and community continues to surprise him.

“We get thanks from so many people who are so thankful that we keep this tournament going,” he said. “They tell me it reminds them of when their kids were young and they meet every year like a homecoming. It’s just overwhelming as the tournament director when we realize how it affects everyone. It just has a different feel than any other hockey tournament.”