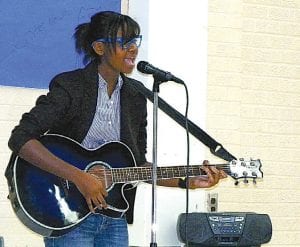 Thea Jones (below), junior, sings and plays guitar during rehearsals for the CAHS talent show.

He is a behavior interventionist for Carman- Ainsworth High School but also the faculty advisor for several student extracurricular activities.

For example, he organizes a Fall Talent Show every year as a fundraiser for the African American Students Association and also puts on a fashion show in the spring.

This year’s talent show was to be held on the night before Thanksgiving.

Eighteen acts signed up for the talent show included singers, dancers, rappers and musicians. They competed for prize money including $100 for first place and amounts ranging from $25 to $50 for second and third place.

Clingman cautioned the students to give it their all in the rehearsals. There were more than enough acts lined up for the show to go on without mediocre performances, he said. 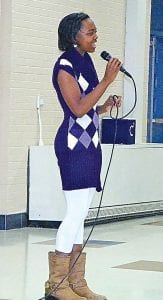 Tahirah Gaines (above) belts out a popular song during rehearsals.

The next performers must have gotten the message because none of them looked like they were simply going through the motions.

In one standout performance, vocalist Tahirah Gaines, a freshman, gave Alicia Keys a run for her money with her soulful rendition of Keys’ “If I

And Yemohni Jones, a sophomore, showed off strong vocals in his gospel rendering of “The Lord’s Prayer.’’

Clingman’s group rehearsed in the cafeteria because the auditorium’s stage was occupied by the CAHS theater group rehearsing for their production of “Cinderella.’’

For them, it was the last night of rehearsals before a three-night run of the show from Nov, 17-19.

The stage was set to present an adaptation of the classic fairy tale written by the students and theater director DeLynne Miller. Book bags filled the first few rows of seats, left there by students putting in the extracurricular hours necessary.

Like Clingman and all educators who give selflessly to the job for the love of it, Miller was still on premises at the end of a regular school day overseeing the rehearsing needed to pay off in a good show.