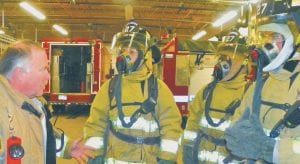 Veteran township firefighter Kevin Clary prepares three of the township’s new on-call firefighter recruits for their introduction to the heat of a burning building.

FLINT TWP. — Firefighters called to a burning home at about 10 p.m. had to first crawl blindly through smoke-filled rooms to find an rescue an occupant.

It was dark and cold outside and the fourman crew were weighted down by heavy gear as they gained entry, located the victim and brought him outside before returning to the burning building to extinguish the flames.

This could easily have been a real-life event but in this case was only a practice scenario given to Flushing firefighters who had their first experiences inside the Genesee County mobile fire training trailers. The unit was purchased early this year for use by fire departments countywide.

After visits to other fire departments in recent months, the unit returned to its Flint Township home base last week for a joint training with Flushing firefighters.

A “live burn’’ practice sets up various scenarios including search and rescue that require fire fighters to call upon knowledge and technique inside the hot, dark, smokefilled trailers that are equipped with tunnels and surprises such as collapsing floors.

Controls outside of the trailer monitor heat and other conditions inside the trailers. The fire fighters were equipped with radios in case they ran into trouble.

Repeatedly yelling “mayday’’ into the radio is all it takes to shut down the entire practice immediately, said Mike Burkley, assistant fire chief for Flint Township, in a briefing before the” live burn” practice began.

So far, there’s been one panic attack inside the trailers during a practice session, Burkley said. Nearly 125 area firefighters have gone through training in the unit, he said.

The joint training with Flushing provided an opportunity for the two fire departments to familiarize themselves with each other’s operations to improve working together on real mutual aid calls.

Three of Flint Township’s new on-call recruits also attended the joint session to get their first exposure to the heat and controlled chaos of a fire scene. The township is in the process of building up its on-call force including eight recruits hired conditionally hired in October. Applications still are still being accepted and can be found on the township’s web site at www.flinttownship.org. or obtained in person at Fire Station #1, 5331 Reuben Street.

Unlike textbook or video training, the trailers provide a real-life simulation of a fire scene including heat, smoke and other potentially dangerous scenarios a firefighter might face. The unit replaces the need to set real buildings on fire for practice drills.

The trailers were purchased with a $159,200 regional FEMA Assistance to Firefighters Grant that covered 80 percent of the cost. Local departments pitched in together to raise about $39,800 in matching funds.