Story and Photos by Bill Springer 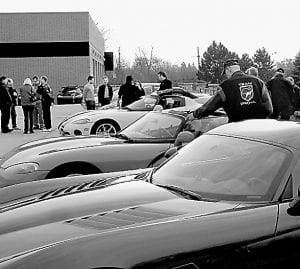 Viper owners descended on the former Kmart on Joslyn Road, which was the scene of a gathering for the Prefix Coatings open house.

The former Kmart location on Joslyn Road is now home to the “finest paint finish in the world,” according to Prefix Corp. president and COO James Adsit.

The company will paint the 2013 Dodge SRT Viper panels at the new Auburn Hills coatings facility.

The finish on the SRT Viper will be done by hand. The striping will be imbedded between the layers of paint, with no protruding edge on the stripe, creating a smooth transition.

Matt Leija works in the stripe room, and he

described the process in layman’s terms. “The stripe is applied first,” he said. “In the case of the hood, the jig positions over the panel, then a pencil line is drawn by hand off the jig. Within the pencil lines, the stripe remains. Outside the pencil line, the body color is applied.”

Eric Zeile, Chrysler program manager at Prefix and son of owner Kim Zeile, said, “The SRT Viper is one of the most Detroitbuilt vehicles. It’s painted in (metro) Detroit and it’s built in Detroit. 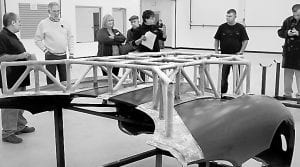 “I’m proud to keep it here, we had no intention of painting it elsewhere.” When asked, why Auburn Hills, Zeile said the city was “overwhelmingly positive, almost like a rubber stamp.”

The Prefix plant has 50 employees at present, in preparation for production. More employees will be hired in time for startup in 2013.

“We don’t plan on stopping at 125 jobs,” said Zeile. “Achieving the best means taking the process to the highest degree. It has to be done by hand.”

Prefix Coatings was awarded the contract to produce the show-quality paint finish through a 100 percent manual process for the 2013 SRT Viper, which will be built at Chrysler Conner Assembly in Detroit.

In previous years, Prefix was the supplier for the striping programs for the Dodge Viper and the Dodge SRT Commemorative Edition vehicles. One of Chrysler’s specifications for the 2013 SRT Viper was to create a 9-plus orange peel final finish that provides a

near mirror surface and achieves “the finest production paint finish in the world.”

Prefix opened the 129,000- square-foot facility in August. A majority of the space will be used for the Viper program.

Parts will be hand-sanded to prepare for priming and paint in a self-contained prep room. Two paint operators will be in each booth to circle each other to achieve the desired throughput and to balance the paint.

Prefix also built the armatures that hold the parts in place during prep, paint and polish. The armatures have articulating devices so that the painters can move the parts while painting to get to the underside.

In addition to the paint process, the facility has a small sub-assembly area and a 10,000-square- foot warehouse, which can hold up to five days of inventory.

The finished painted parts will be sequenced in build order, and shipped to Conner Assembly.

“Viper owners are an enthusiastic crowd and love their Vipers,” said Zeile. “One of the biggest complaints was when they waxed their Viper, the wax would build up on the edge of the stripe.”

This should bring an end to that complaint. Call it a Prefix.