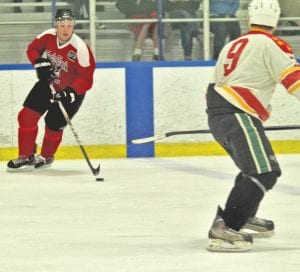 A Swartz Creek player from several seasons ago turns with the puck.

The tournament will feature 23 teams representing 13 schools in Lapeer and Genesee counties. The teams are comprised of two age brackets. There will be an 18-and-over squad and a 30-andover squad. A total of 330 players will play for their respective alma maters.

The event is also a fundraiser for the Flint Old Newsboys. Fans are asked to donate cash or a winter coat at the door.

Proceeds from the team’s entry fees contribute to the Michigan Youth Hockey Scholarship Fund which puts money into youth hockey in both counties. The event has raised well over $10,000 for its charity and was also a key sponsor of the 2016 Flint Inner City Youth Hockey Program which gave children from the inner city of Flint the opportunity to learn the sport for free.

There will be a special ceremonial puck drop/faceoff to help commemorate and celebrate the life of Rory MacDonald. MacDonald was a former high school hockey player from Lapeer East High School who graduated in 2007.

MacDonald, who competed in the first five tournaments, lost his life in a car accident Jan. 10 of this year. His parents will be in attendance and will participate in the ceremony which will take place preceding the Lapeer East-Lapeer West 18-and-over game at 7 p.m. Saturday, April 9 at the Polar Palace.

A full schedule and details can be found at www.highschoolhockeyalumni.com and on Facebook at High School Hockey Alumni Tournament. If anyone wants further information they can contact Rico Phillips at 810-513-0189.