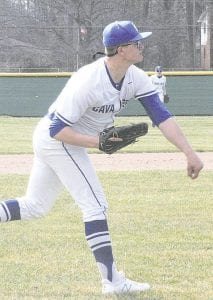 Carman-Ainsworth’s Chase Matusik, shown here throwing to first after fielding a bunt against Heritage on April 23, will play for the South in the upcoming All-Star Game. Photo by Brandon Pope

Chase Matusik will represent Carman- Ainsworth on the mound for the South. Matuisk, a lefty, also played in the 26th annual Bruin Classic All-Star game last month at Whaley Park in Flint. His season stats are unavailable, as no stats or details were reported for Carman- Ainsworth throughout the past season.

Game time for this fourth annual showdown between some of the finest baseball players in the Mid-Michigan area is 6 p.m. at Dow Diamond.

This all-star game is sponsored by the Greater Flint Area Baseball- Softball Association (GFABSA), a 501c3 non-profit organization based in Flint, that provides baseball and softball opportunities for Flint area residents and beyond, for “kids of all ages”, with the goal of fostering sportsmanship, teamwork and skills development.