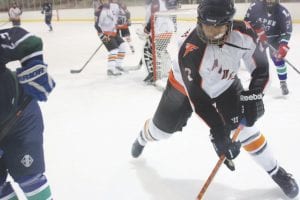 FLINT – When IMS Hockey announced in December 2014 that it intended to buy the former Perani Arena and Event Center and then planned to bring an OHL team to the site, high school hockey teams Davison, Grand Blanc and Kearsley-Brandon-Holly thought they would have to move out of the arena.

On January 14, 2015, IMS Hockey bought the Plymouth Whalers and relocated the team to Flint, renaming it the Flint Firebirds in March. The Michigan Warriors of the NAHL at that time lost their lease at Perani but were allowed to finish out their season. The team is currently in dormancy.

Rumors began to circulate during the high school hockey playoffs at Perani Arena in March, but discussions over the past four months between IMS Hockey management and the schools have ended with the three high school teams remaining.

Dort Federal Credit Union Event Center General Manager Jeremy Torrey had said back in March that no team was being pushed out and that IMS Hockey was fully invested in working out agreements to retain all three high school teams, along with its new OHL team. On Saturday during the Be A Tourist in Your Own Home Town Open House, Torrey added that Grand Blanc High players were on hand to hang out and support the Firebirds as they greeted the public. Torrey said he has already scheduled games for Grand Blanc, Davison and Kearsley, which is in a coaching transition, for the upcoming season.

Over the past couple months, high school principals at Davison, Grand Blanc and Kearsley took concerns from their coaches to IMS Hockey, namely about practice times and game scheduling that were going to conflict with OHL regulations that stipulate that no teams can use ice within four hours of games. A speculated jump in ice fees also was a major point of contention, but that too was a rumor spun out of control. Added to the mix was that Grand Blanc was named as the partner home school for the Flint Firebird high school-aged players. Torrey said all sides worked out their concerns and everyone is set and looking forward to the upgrades at the Event Center, which are ongoing.

“We will continue to call The Dort Federal Credit Union Event Center (former Perani Arena) home and our excited to do so,” Beamer said. “Even more exciting will be the awesome upgrades that will be taking place to the event center! It will be great for our team and student athletes, as well as the Cardinal fans.

Beamer added that scheduling has also largely been ironed out.

“I have been able to talk to Jeremy (Torrey) from the Event Center and he has let us know that we won’t have to make too many changes in regards to our schedules, and as we have in the past, we’ll just have to work with the OHL team and plan some practices and games at different arenas when they are in action at the Event Center. I know our players will look forward to sharing the ice with the Firebirds when and if need be.”

Davison previously had to make other arrangements when the Flint Generals of the UHL called Perani Arena home.

Beamer added, “Our Davison locker room will remain the same, although we may see some upgrades made around it. All in all, next hockey season will go on as usual and we look forward to some new additions to the team as the student athletes look to add to Coach Towler’s 500+ career wins, and be a respected force as they always are!”

“We are staying, our locker rooms stay,” Byarski confirmed last Tuesday. “With us being home school for the Firebirds, the agreement only makes sense. I’m glad it’s all worked out. Our new locker room is on the opposite side as the OHL teams and their visitor locker rooms, so we’re all good.”

In recent weeks it had been rumored that Grand Blanc was moving to Crystal Fieldhouse. Byarski said last Monday that while Grand Blanc High did exercise its options in case of a move, he’s just pleased that it’s all worked out.

“We had had serious discussions with Crystal Fieldhouse when everything was unknown, but management at Dort Federal has been great to work with over the years,” Byarski said. “Our lockers were built so we could have taken them with us, but there is a lot of blood, sweat and tears, and heart and soul in that locker room and I would have hated to see us have to move and tear that up. Jeremy Torrey and the Management at Perani has been very good to work with. Our principals have to okay all these moves, so Jennifer Hammond had done her work to make this a nice situation for everyone involved. She did a lot of work to get the Firebirds into Grand Blanc High School and also to keep us where it’s the best situation for the high school team. It’s going to be a good thing for our teams, and for hockey for Flint in general.”

“I don’t schedule us at home at all in January because that’s the time frame for the circus and other events. It’s worked out fine for us over the years.”

Kearsley coach Steve Yuchasz retired at the end of last season, but when the VIEW spoke to him during regional play in March, said Kearsley was all set and prepared to stay put at Perani.