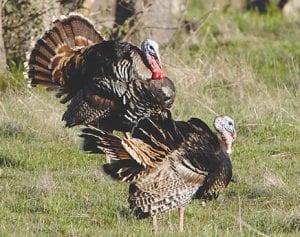 Wild turkeys in Michigan have a healthy population that can support a spring and fall hunting season.

GENESEE COUNTY — Michigan’s wild turkey population remains strong after a re-introduction program that failed four times before becoming successful after the birds had disappeared from the state by 1900, shows the state’s historical data. Decades worth of habitat management helped the turkeys repopulate in Michigan.

Now year-round residents of the state, the population numbers sustain a fall and spring hunting season. The wild turkey is one of the largest birds in the country and can reach speeds of up to 55 mph for short distances. They have a keen sight and can adjust to the climes of the state by foraging for bugs and insects in the spring and summer to stands of trees in the winter.

The state encourages all residents to report January sightings of wild turkeys to help manage the birds and establish future quotas for hunting. Sightings can be reported at www.michigan.gov/turkey or by calling any Department of Natural Resources office.

Perhaps not so well known, Benjamin Franklin wanted the wild turkey to be the national symbol over the bald eagle because of its “stately, majestic qualities”, so claim state officials.

Hunters interested in pursuing wild turkeys during the annual spring hunt period have until Feb. 1 to apply for a permit. Drawing results will be posted online March 1 and any leftover licenses will be available for purchase starting March 19. Licenses will be sold until the quotas are met for each hunt unit and may not be available for some units.

The season dates for spring turkey hunting vary by hunt number and include Hunt 234, which is open in all management units. The season runs May 7-May 31 for this hunt. Because this hunt is open statewide there is no application fee and licenses may be purchased Jan. 1-May 1. The limited-quota license is available for specific hunt units and must be applied for through the state’s drawing process at a cost of $4. Thirty-three unit specific hunts are also available with dates running April-May. Hunt 301 in Unit ZZ covers all counties and the majority of the lower portion of the Lower Peninsula, including portions of Bay, Midland, Isabella, Muskegon counties and south. 65,000 licenses are available for Hunt 301.

Heading into the spring hunting season, numerous local outdoor groups and turkey organizations put on spring wild turkey hunting workshops. Locally, Williams Gunsight and Outfitters hosts a session on March 31 through a partnership with the Flint River Chapter of the National Wild Turkey Federation. A fee is usually charged and space is limited. Seminars, turkey calling techniques, call making sessions and more are offered as part of the turkey hunter orientation courses. To sign up call Jim Miller at 810- 742-2120 or e-mail jmmturkey@att.net.