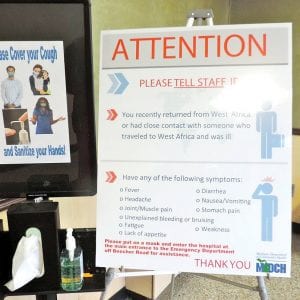 So far, thankfully, there have been no Ebola virus cases reported in Michigan but a recent visit to McLaren Medical Center in Flint shows a proactive stance is being taken in the wake of an incident at a Texas hospital in September, which mishandled an infected West African man who later died. This informational sign and sanitation equipment was placed at a side entrance at McLaren with instructions to proceed to the emergency entrance. As a precaution, Michigan Governor Rick Snyder, Michigan Department of Community Health Director Nick Lyon, and Chief Medical Executive Dr. Matthew Davis participated in a roundtable discussion on October 22, regarding Ebola virus preparedness in Michigan. More information about the virus including the number of people being monitored in Michigan and links to the Center for Disease Control web site can be found on the Michigan Emerging Disease Issues web site at http://www.michigan.gov/emergingdiseases/ 0,4579,7-186-69879—,00.html