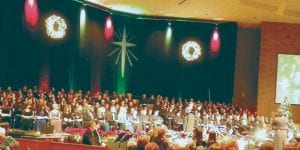 The C-A Chorale began rehearsing separately and together during the first week of school back in September, said Faith Yassick, C-A Choral Music director.

“Preparing for the concert took discipline and dedication,” she said. It was a real challenge singing some of the choruses, as some were more difficult than others.”

“Messiah” including well-known favorites “Hallelujah Chorus” and “For Unto us A Child Is Born.” is a three-part oratorio created by German composer George Frideric Handel in 1741. It is based on scripture and musically recounts the birth, life and ascension of Jesus Christ.

This is Carman-Ainsworth’s 3rd year of participating in “Messiah,” Yassick said.

The challenging joint performance is done every three or four years by the Carman-Ainsworth Chorale, Flushing Acappella, Grand Blanc Chorale, and Powers Catholic Choir, she said. Members of the Flint Symphony Orchestra and the New Century Chorale, an adult choir based in Grand Blanc, also joined students for this year’s performance.

In 2008, the performance took place at The Whiting auditorium but this year the students were invited to perform at the Central Church of the Nazarene on Bristol Road, which has auditorium that seats 1,200, Yassick said.

“This oratorio (large work for choir, orchestra, soloists) gives the students an opportunity to sing a work that they may never otherwise do so,” Yassick said.

Not only did they learn the chorus, study the music and get to know Handel, they gained experience singing in a very large group with a professional orchestra which Yassick said is important for a choral student.

“We met twice monthly for 21/2 hour rehearsals,” she said.

Each student had an opportunity to audition for the choruses and students from each high school were represented in various solos. Solos that required more experienced voices were performed by two graduate students from Michigan State University, who were invited to take part in the performance, Yassick said.

”The students will carry this experience for the rest of their lives,” she said. “Some will go on to sing it again in their lifetime. I am glad that they had their first experience with “Messiah” as a high school student at Carman-Ainsworth. It was a major accomplishment.”