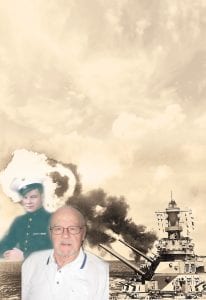 SWARTZ CREEK — “I was walking around Engebi Island’s Marine Base and saw two technical sergeants with five stripes on their jackets trying to get a starter out of a plane. I guess I snickered a couple of times because someone called out what is the object of your mirth?”

“I responded, well sir it seems like you have men who aren’t big enough to do the manual labor.”

And, so the guard stated, “You are now the unofficial starter man.”

“Unfortunately, I was good at it,” said Lloyd Coon, who entered the Marine Corps directly after high school in 1942.

Coon, served as Marine for the United States during the war at a surplus station, “grocery store, if you will” on Engebi Island, part of the Eniwetok Atoll.

He is one of 40 area area World War II veterans who are taking a trip to the memorial in Washington D.C. on June 18.

Of Swartz Creek’s Memorial, Coon said, “It is wonderful. The outpouring of support is something I haven’t seen in many, many years.” 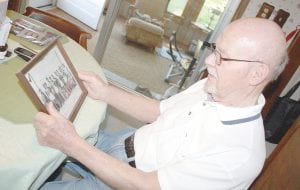 Lloyd Coon of Swartz Creek looks over photos from his days in the U.S. Marines when he was stationed in the Pacific. He will join 39 other area veterans for a trip to Washington D.C. on June 18 to visit the World War II Memorial.

Coon considers himself a “vocal ringleader” for veterans. He has gotten himself into many verbal and physical altercations in defense of those who serve our country, many of which happened after the Vietnam War.

“The Vietnam vets were treated uncivilized,” he said.

“In 1970 I was working for GM. I was at the airport terminal in Washington D.C. and it was full of protesters. There were six guys in sheets and one had a container. I knew it was paint. I pushed the solider aside that they were approaching and threw a punch. Sure enough, it was paint.”

Coon’s daughter Linda said, “If anyone deserves an award for sharpest memory, it’s dad.” With clarity, the now 87 year-old veteran can recall dates with deftness and by the look in his eyes, he can recall the images of his life with vivid detail.

“There is something about being on that island, that small, seeing the blue expanse. It does something to you,” he said.

It was there on Engebi Island, that Coon experienced the war and established lifelong friendships. “It was all well worth it,” he said.

Combat was rare on the island, but Marines often would turn to riflemen at a moments notice. Japanese snipers were often around, in hiding.

“I had to face the prospect of smelling stagnant dead bodies. We had to cut the dog tags. One was for us and one was for the Red Cross. Every serviceman who’s been in the Pacific knows what I am talking about. Disease ran rampant. It was the worst smell that ever hit my nostrils,” he said.

There were many days where Coon and his fellow Marines “were bored stiff,” especially in the summer of 1944. There were only two radio stations that came in, one from Australia and one from Montreal, Canada and of course the vocal taunts of Tokyo Rose.

While several men dissented or jumped on other ships, Coon and the rest of the remaining Marines decided to start a softball team and a boxing team. The latter sat well with Coon, who had been playing the sport of boxing since his early teen years.

Coon, after his service was recruited to box for Michigan State University. Postgraduation he bought a round-trip bus ticket from East Lansing to Brooklyn, and it was there he boxed in professional fights for about a year.

He is a national title winner for both power lifting and weight lifting, having won competitions well into his eighties.

Coon started a weightlifting program for boys and girls in Swartz Creek in the 1980s. He recalls it as the best job he ever had.

He also spent 17 years teaching in the area. It was through these outlets that he spoke of the dangers of steroid use and advised any involved in the sport to compete the natural way using methods and information from his involvement with The American Drug Free Power Lifting Federation.

Born and raised in Flint, Coon didn’t move to Swartz Creek until he met the love of his life.

“I went to the hospital and saw a cute clerical girl. Ultimately, I married her,” the widower said of his beloved Bernetta.

The father of three, endowed with a sharp memory said he and his wife were married exactly 55 years, seven months, and four days. “She was responsible for 90 percent of the good things that came my way,” he said.

One of the many good things Coon speaks of includes his induction into the Greater Flint Area Sports Hall of Fame in 2003.

Of his life, Coon said, “I have no regrets.”

On June 18 a group of 39 local World War II veterans will take a one-day trip to Washington, D.C., aboard a Pride and Honor flight, to visit the National WWII Memorial there.

The trip, sponsored through donations to the Davison Knights of Columbus, will give these men a chance to see this great monument and remember the sacrifices they and their generation — the Greatest Generation — made for this country.

The Davison Index and View Newspapers will present articles in the coming weeks which provide a glimpse at some of these American heroes. Managing Editor Gary Gould will be going to Washington, D.C. with the group on June 18 to document the journey for readers. Look for that account in the June 23 edition.