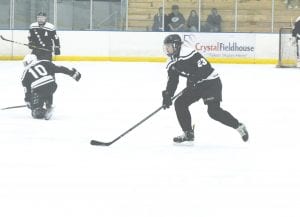 MIDLAND — The 2020 season came to an end for the Pride hockey team (Flushing-Swartz Creek-Goodrich) in the opening round of the Div. 2 regional at Midland last Friday after Bay City Western shut out the team 14-0 in two periods. Teams have to play at least two periods before the mercy rule in enacted.

The Pride drew a bye in the opening round last Tuesday and Lapeer received the other bye. In the only opening game, No. 2-ranked Saginaw Heritage beat Essexville-Garber 8-0.

In Friday’s semifinals, Lapeer was routed by Heritage, 9-1. Saginaw Heritage and BCW went head to head for the title in Wednesday’s regional, which took place after we went to press. That winner advances to the Div. 2 quarterfinals on March 7 at Brighton.

“All season our team practiced and played hard. The whole team improved from start until the finish of the season,” said Pride coach Ben Guzak. “They all became better skaters and players started to really understand the game. Our captains and seniors provided great leadership keeping the team on track and moving forward.”