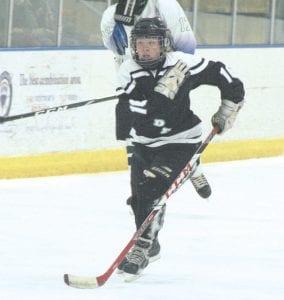 The Pride’s Anthony Seitz (16) skates the puck against Lapeer on December 4. Photo by Brandon Pope

FLINT – Success for the Pride co-op hockey team (Flushing/ Swartz Creek/Goodrich) has been measured lately by goals scored against opponents. Most of the games this season have been shut outs. Over the past couple of weeks, however, the team has scored two and three goals off its opponents.

Last Saturday against the Thumb Legion in Ubly, the Pride lost 10-3, marking the fifth game of the season where the team has begun to solve the riddle of how to get goals in the net.

With three games remaining on the slate for the regular season, the Pride has several more opportunities to make the next step in its growth before regional play begins on Feb. 24. — L.P.