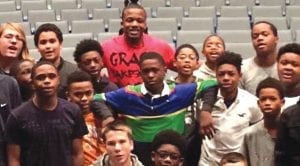 FLINT TWP. — Who better than an ex-NFL player to mentor young, aspiring athletes?

Chris Wilson, 33, a former professional football player and Flint native, did just that when he spoke to a group of 7th and 8th grade football players at Carman- Ainsworth Middle School last week.

His message was about character and leadership, said Kevin Summey, CAMS principal.

“He used personal examples to make connections to situations that our youth are currently dealing with.” Summey said. “(He) encouraged the students to make good choices, associate with good people and work to get better everyday.”

Wilson is a graduate of Flint Northern High School and Northwood University where he earned a Bachelor of Business Administration degree in Entertainment, Sports, Promotion, and Management.

He played professional football from 2005-2014. An athlete since grade school, he realized his dream of becoming a professional football player when he joined the BC Lions of the Canadian Football League where he played two seasons. He then did two stints with the National Football League’s Washington Redskins from 2007-10 and also in 2012. He signed briefly with the Philadelphia Eagles in 2011.

Wilson returned to the BC Lions in 2013 and played for the Montreal Alouettes in 2014.

Wilson plans to visit CAMS again in January for a follow up with the same group of students, Summey said.

Wilson is founder of the CSW Faith Foundation, youth philanthropy, based in Flint.